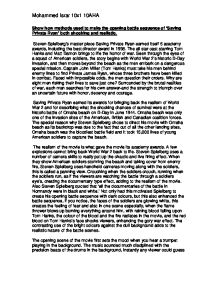 Show how methods used to make the opening battle sequence of 'Saving Private Ryan' both shocking and realistic. Steven Spielberg's master piece Saving Private Ryan earned itself 5 academy awards, including the best director award in 1998. The all star cast starring Tom Hanks and Matt Damon brings to life the horror of war. Seen through the eyes of a squad of American soldiers, the story begins with World War 2's historic D-Day invasion, and then moves beyond the beach as the men embark on a dangerous special mission. Captain John Miller (Tom Hanks) must take his men behind enemy lines to find Private James Ryan, whose three brothers have been killed in combat. Faced with impossible odds, the men question their orders. Why are eight men risking their lives to save just one? Surrounded by the brutal realities of war, each man searches for his own answer-and the strength to triumph over an uncertain future with honor, decency and courage. Saving Private Ryan earned its awards for bringing back the realism of World War 2 and for describing what the shocking chances of survival were at the historic battle of Omaha beach on D-Day in June 1944. Omaha beach was only one of the invasion sites of the American, British and Canadian coalition forces. The special reason why Steven Spielberg chose to direct his movie with Omaha beach as its backdrop was due to the fact that out of all the other landing sites, Omaha beach was the bloodiest battle field and it took 15,000 lives of young American soldiers to capture the beach. ...read more.

follows up with a set of instructions for the men on the boat, hinting he is leading them. The way he speaks also makes the viewer think that they know exactly what they are doing with no hesitations. Slowly we begin to hear shells getting louder and louder exploding near the boats, until one boat actually gets hit and the blood splatters all over other nearby boats. Immediately would start questioning themselves and ask what is actually there on the beach. The boat stops, all we hear are shell and waves and the spinning latch drawing down the ramp. At this point the camera is located between few soldiers at the front of the boat, allowing us to see exactly what the soldiers can see. As soon as the ramp just comes halfway down, you see a raining rapid fire of bullets charging and mowing down soldiers at the front. This camera angle is very effective because the ramp hasn't hit the ground yet and soldiers have already started dying, others behind them rushing up front only to be greeted by German machinegun fire. This shocks the audience at first, they can see the bullets, and they hear the bullets as if it is flying past their ear. This shot alone improve the scene and constructs a very realistic battle sequence. When the men then try to get off the boat from the sides, the camera follows them under water, and you see horrific images off soldiers trying to get their gear off and suddenly get shot underwater with their blood diffusing in it. ...read more.

They were referring to all the dead soldiers on the beach, exactly then the slow emotional music is played again as the camera turns towards the aftermath gives a whole wide picture of the carnage that was left on the beach. Hundreds of bodies lay dead, the music although creates a peaceful effect, the first reaction of a sentimental audience would be tears dripping out of their eye's. The final shot of the scene is the close up of one of the Ryan brothers lying dead on the beach with a bloody tide rushing in. The ending scene was probably the most effective scene of all because it immediately shows the reality and chaos war brings to mankind and what kind of courage it takes people to rise up against it. Overall I think Steven Spielberg has created a masterpiece in re-creating D-Day. Not only that, the way the whole battle sequence followed and linked each other was remarkable. I mean to say the graveyard, the old veteran crying, the music, really prepared me to expect the next scene to be a battle. But I did not know it was going to be that chaotic and brutal that it literally shocked and surprised me. The accuracy and the, idea of hand held cameras really involved me with the movie and I think that's what I enjoyed the most, the realism of the movie convinced me that, that is how D-Day happened. Saving Private Ryan was definitely worth watching, it has taken the war film genre to a whole new level. Mohammed Israr 10x1 10AHA ...read more.