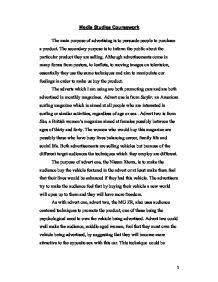 Analysing adverts in the media.

Media Studies Coursework The main purpose of advertising is to persuade people to purchase a product. The secondary purpose is to inform the public about the particular product they are selling. Although advertisements come in many forms from posters, to leaflets, to moving images on television, essentially they use the same techniques and aim to manipulate our feelings in order to make us buy the product. The adverts which I am using are both promoting cars and are both advertised in monthly magazines. Advert one is from Surfer, an American surfing magazine which is aimed at all people who are interested in surfing or similar activities, regardless of age or s*x . Advert two is from She, a British women's magazine aimed at females possibly between the ages of thirty and forty. The women who would buy this magazine are possibly those who have busy lives balancing career, family life and social life. Both advertisements are selling vehicles but because of the different target audiences the techniques which they employ are different. The purpose of advert one, the Nissan Xterra, is to make the audience buy the vehicle featured in the advert or at least make them feel that their lives would be enhanced if they had this vehicle. ...read more.

Advert two mainly uses red in its promotion. The colour red is often associated with danger but can also signify love and passion. The fact that the MG ZR is red could be interpreted on two levels. One thought could be that you will be a more passionate and s******y attractive person if you owned this car or secondly it could be interpreted that you cannot fail to be passionate about this MG ZR. The red of the car contrasts sharply with the warm gold background of the tunnel. The gold represents elegance and wealth suggesting that people will see you as being more wealthy and elegant if you were to drive the car. There is a logo and a slogan in the bottom right hand corner of the first advert. They are both simple and big enough to be noticed and remembered. The slogan is simply "driven" which is easy to remember and it also emphasises the simplicity of the design. The slogan tells us what the product is designed to do. The logo for the second advert is large enough to be noticed and clearly states the company's name "MG". The logo is in gold which represents wealth and elegance. ...read more.

The presentational devices are well thought-out and the advertisers manage to keep the readers attention focused on the car very effectively. The language in the second advert is more persuasive as puns, rhetorical questions and lists of three have been used, whereas the language in the first advert is very simple and does not include much in the way of persuasive techniques of any sort apart from informal language. There is also a sufficient amount of technical jargon and informative data which is not included in the first advert. In conclusion, both adverts are audience centred rather than product centred and the advertisements have clearly employed techniques which would appeal to their targeted audiences. I think that both adverts work well in magazines, and that advert one would work well on a billboard as it is more image orientated where as advert two relies on language to sell the product. Advert one also has a larger audience whereas advert two has a limited audience so therefore works better in a specialist magazine or publication. Advert two would also work well on women's television channels as it would reach its intended target audience and it would also be possible to enhance the use of language with a narrator speaking in a s****l tone. Advert two would also be effective on radio for this reason, as it is less reliant on images to sell the product. 1 ...read more.