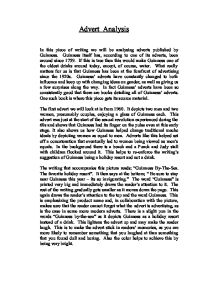 Advert Analysis In this piece of writing we will be analysing adverts published by Guinness. Guinness itself has, according to one of its adverts, been around since 1759. If this is true then this would make Guinness one of the oldest drinks around today, except, of course, water. What really matters for us is that Guinness has been at the forefront of advertising since the 1920s. Guinness' adverts have constantly changed to both influence and keep up with changing ideas on gender, as well as giving us a few surprises along the way. In fact Guinness' adverts have been so consistently good that there are books detailing all of Guinness' adverts. One such book is where this piece gets its source material. The first advert we will look at is from 1960. It depicts two men and two women, presumably couples, enjoying a glass of Guinness each. This advert was just at the start of the s****l revolution experienced during the 60s and shows that Guinness had its finger on the pulse even at this early stage. ...read more.

This lightens the advert up and may make the reader laugh. This is to make the advert stick in readers' memories, as you are more likely to remember something that you laughed at than something that you found dull and boring. Also the color helps to achieve this by being very bright. I believe that the target audience of this advert is the young adults because it shows that drinking Guinness is cool. In this way it appeals to snobbery and the desire to be cool and to keep up with what is fashionable. It also challenges popular notions of gender by showing women drinking with the men. In this way it depicts women as equal. The second advert that we will look at is a T.V commercial from 1996. It is broken up into eight slides. It shows women at work in what were traditionally considered as men's jobs, like working down a mine and driving a lorry. It also shows a woman beating a man in an arm wrestle and an empty maternity ward. This is showing that women are as good as if not better than men at a man's own job. ...read more.

This picture, coupled with the headline, is supposed to tell the reader that drinking Guinness will make you look like the statue. The image of the cleaner drinking Guinness is designed to show that anyone can drink Guinness, and you don't have to be like the statue. This is designed to reinforce Guinness' image of it being a workingman's drink. The headline of the advert is, "Guinness for Strength". This is telling the reader that drinking Guinness will make you strong and that it will make you look like the statue shown in the picture. Although the avert does not actually say this it implies it. The writing is big and bold and done in capital letters. This is to draw the reader's attention to the word Guinness and the slogan. I think that the target audience of this advert is young men, who want to get better bodies, and also middle-aged men, who are worried about their figures. I think that the advert appeals to the motion of wanting to better ones elf and the desire for perfection. In conclusion I would say that Guinness' continuing ability to challenge popular ideals of sexuality and gender has kept the drink and the adverts popular. ...read more.