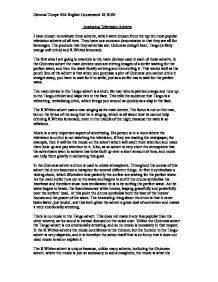 Analysing Television Adverts I have chosen to evaluate three adverts, which were chosen from the top ten most popular television adverts of all time. They have one common denominator in that they are all for beverages. The products that they advertise are: Guinness draught beer, Tango (a fizzy orange soft drink) and R.Whites lemonade. The first area I am going to examine is the main devices used in each of these adverts. In the Guinness advert the main devices used are stirring images of a surfer waiting for the perfect wave, and then the wave finally arriving and him surfing it. This works well as the punch line of the advert is that when you purchase a pint of Guinness you cannot drink it straight away, you have to wait for it to settle, just as a surfer has to wait for the perfect wave. The main device in the Tango advert is a short, fat man who is painted orange and runs up to the Tango drinker and slaps him in the face. This tells the audience that Tango is a refreshing, revitalising drink, which brings you around as quickly as a slap in the face. The R.Whites advert uses a man singing as its main device. The focus is not on the man, but on the lyrics of the song that he is singing, which is all about how he cannot help drinking R.Whites lemonade, even in the middle of the night, because the taste is so delicious. ...read more.

When the Guinness advertising campaign was first launched the slogan was "Guinness is good for you", however this had to be abandoned when the advertising standards board said that the advertisers could not tell people that Guinness was good for them because Guinness is an alcoholic drink and alcohol is actually very bad for you. Guinness then stumbled around for a few years and came up with a few slogans, none of which really stuck. Eventually, in about 1998 the company responsible for advertising Guinness went round several bars and pubs and discovered that they could base their campaign around the fact that when you pour a pint of Guinness you have to wait for it to settle before you can drink it. They then came up with a slogan based on this and a well-known proverb: "Good things come to those who wait" It was this slogan that formed the basis for the advert I am studying because, just as a surfer has to wait for the perfect wave, you have to wait for the perfect pint of Guinness. The slogan in the Tango advert is: "You know when you've been Tangoed" This has a double meaning, firstly, that you will know when you have been "Tangoed" (slapped in the face) and secondly, that Tango is such a refreshing and delicious drink that you will recognise its taste over other "inferior" drinks. This slogan was so successful that "Tangoed" actually became a colloquial verb. ...read more.

In the Guinness advert the voiceover is speaking some very moving prose and this gives the advert an almost poetic feel. The voice is also deep and authoritative and therefore ties in with the beat of the drum, which I mentioned earlier to give the advert a felling of deep, overpowering emotion. In the Tango advert, there are two voiceovers used. The main voice over is that of two football - style commentators. The first time you see the man drink the Tango you do not see the orange man slap him, you just see a man drink a drink and look very surprised. Seeing that this Tango drinker looks so shocked, the commentators call for a replay, and you see the scene rewound and replayed, and as the commentators do a humorous running commentary, you see the man get hit in the face. Without the commentary the advert would not be as effective or as amusing. The second voice over is at the end of the advert and reads out the slogan that I mentioned earlier, which is printed on the back of the orange mans head. Like the orange man himself, the voice is a little bit serious and sinister, but funny at the same time. I do not think that it would be possible for me to choose a favourite advert as the way in which each advert carefully blends together all the aspects I have mentioned makes for truly wonderful television viewing. Gemma Thorpe 10A English Coursework 18.10.00 ...read more.