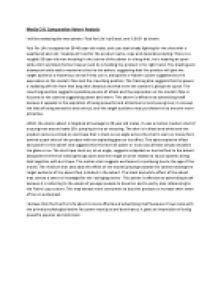 Analysing the two adverts Fuel for Life by Diesel, and LOUD by denim

﻿Media CA1 Comparative Advert Analysis I will be analysing the two adverts ?Fuel for Life? by Diesel, and ?LOUD? by denim. Fuel For Life is targeted at 20-40 year old males, and uses dark shady lighting for the shot with a weathered and old, ?steampunk? text for the product name, copy and decorative styling. There is a roughly 20 year old man kneeling in the centre of the advert in a long shot, he is wearing an open white shirt and black formal trousers and he is holding the product in his right hand. The shading and steampunk style adds a mysterious feel to the advert, suggesting that the product will give the target audience a mysterious sense if they use it, along with a ?hidden? power suggested by the expression on the model?s face and the crouching position. ...read more.

This advert is effective at advertising itself because it appeals to the aspiration of being powerful and attractive to most young men; it conveys the idea of being attractive and serious, and the target audience may purchase this to become more attractive. LOUD, the denim advert is targeted at teenage to 30 year old males. It uses a motion medium shot of a young man around early 20?s jumping in the air shouting. The shot is in black and white and the product name is printed on duct tape that is stuck on an angle across the shot in worn or messy font, behind a pack shot of the product with an exploding glass or ice effect. ...read more.

The medium shot also adds the effect of the model jumping towards the camera making the target audience of the advert feel included in the advert. The black and white effect of the advert may convey a sense of nostalgia for the ?swinging sixties?. This advert is effective at advertising itself because it is referring to the desire of younger people to have fun and to party, also referencing to the ?Retro? pop culture. This may attract more consumers to buy this product to increase their sense of fun or excitement. I believe that the Fuel For Life advert is more effective at advertising itself because it toys more with the primal psychological desire for power mystique and dominance, it gives an impression of being powerful popular and dominant. ...read more.