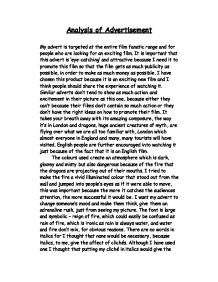 Analysis of Advertisement My advert is targeted at the entire film fanatic range and for people who are looking for an exciting film. It is important that this advert is 'eye-catching' and attractive because I need it to promote this film so that the film gets as much publicity as possible, in order to make as much money as possible. I have chosen this product because it is an exciting new film and I think people should share the experience of watching it. Similar adverts don't tend to show as much action and excitement in their picture as this one, because either they can't because their films don't contain so much action or they don't have the right ideas on how to promote their film. It takes your breath away with its amazing composure, the way it's in London and dragons, huge ancient creatures of myth, ...read more.

The font is large and symbolic - reign of fire, which could easily be confused as rain of fire, which is ironic as rain is always water, and water and fire don't mix, for obvious reasons. There are no words in italics for I thought that none would be necessary, because italics, to me, give the affect of clich�s. Although I have used one I thought that putting my clich� in italics would give the impression of a low budget film, with tacky American acting and a pathetic, unbelievable story which most American action flicks have. The text 'It'll blow U away' is aimed more at the younger generations because they are very familiar with this type of slang. 'U' is how many young people write in short messages and chat rooms and things. ...read more.

This is important because if the viewer of the advert can remember the title of the film after looking at the advert then that advert is successful in spreading the image of that film. The 'Reign of Fire' advert is different from other film adverts because of the fact that it is so 'close to home' with Big Ben in the background. There are giant dragons in the picture flying round the city of London, capital of one of the best economic countries, England. Most adverts are pictures of clear and stationary objects, whereas my advert is of vividly moving giant monsters with incandescent flames flowing out of their mouths, pouring death and suffering into the life below them. It is a picture that you can let your imagination run away with very easily. It makes you want to press a giant play button to see what will happen next and to see these beasts in motion. ...read more.