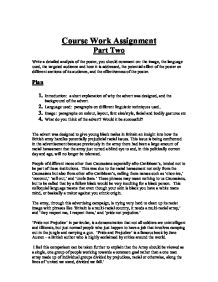 Course Work Assignment Part Two Write a detailed analysis of the poster, you should comment on: the image, the language used, the targeted audience and how it is addressed, the potential effect of the poster on different sections of its audience, and the effectiveness of the poster. Plan 1. Introduction: a short explanation of why the advert was designed, and the background of the advert. 2. Language used: paragraphs on different linguistic techniques used.. 3. Image: paragraphs on colour, layout, font size/style, facial and bodily gestures etc 4. What do you think of the advert? Would it be successful? The advert was designed to give young black males in Britain an insight into how the British army handles potentially prejudicial racial issues. This issue is being confronted in the advertisement because previously in the army there had been a large amount of racial harassment that the army just turned a blind eye to and, in this politically correct day and age, will no longer be tolerated. ...read more.

'Pride not Prejudice' in particular, is a demonstration that not all soldiers are unintelligent and illiterate, but just normal people who just happen to have a job that involves camping out in the jungle and carrying a gun. 'Pride and Prejudice' is a famous book by Jane Austen - a British author who is highly acclaimed by critics around the world. I feel this comparison can be taken further to explain that the Army should be viewed as a single, one group of people working towards a common goal rather than a one man army made up of individual groups divided by prejudices, racial or otherwise, along the lines of 'united we stand, divided we fall.' The advert is in black and white; the main writing is set obliquely across the page to catch the reader's eye, and the language used is aggressive. ...read more.

The lighting also creates the visual illusion that no matter where you are in relation to the advert his eyes always appear to be looking directly at you - exactly the same effect achieved by Leonardo da Vinci in one of his most famous works of art entitled 'Mona Lisa.' I think that if I was a member of the British Afro-Caribbean ethnic minority, it have a strong influence over my future employment and career prospects. It would make me 'stand tall' and proud and want to be counted. It would give me hope for the future - that I had a well-paid job and the respect I feel I deserve. I could 'get on with the job' and do my best without fear of being undermined by prejudices. The advert would be very effective where the targeted audience was concerned. ...read more.