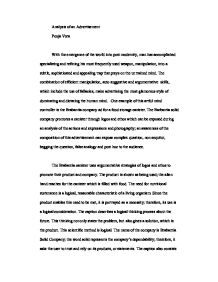 Analysis of an Advertisement

Analysis of an Advertisement Pooja Vora With the emergence of the world into post modernity, man has accomplished specializing and refining his most frequently used weapon, manipulation, into a subtle, sophisticated and appealing trap that preys on the untrained mind. The combination of efficient manipulation, auto suggestive and argumentative skills, which include the use of fallacies, make advertising the most glamorous style of dominating and dictating the human mind. One example of this artful mind controller is the Brabantia company ad for a food storage canister. The Barbantia solid company promotes a canister through logos and ethos which can be exposed during an analysis of the actions and expressions and photography; an awareness of the composition of this advertisement can expose complex question, non sequitur, begging the question, false analogy and post hoc to the audience. The Brabantia canister uses argumentative strategies of logos and ethos to promote their product and company. The product is shown as being used; the alien hand reaches for the canister which is filled with food. The need for nutritional sustenance is a logical, reasonable characteristic of a living organism. Since the product enables this need to be met, it is portrayed as a necessity; therefore, its use is a logical consideration. ...read more.

Also, it also shows the product fulfilling a living organism's most basic need, hunger. The providing characteristic of the canister and the absence of any appeal to intense emotion emphasize the logical and rational need for the product. First, the ad does not use any human characters. It does not portray intense emotions of anger or passion. The ad also does not appeal to a classical human aesthetic sense by displaying warm colors, elaborate and rustic designs or layout, or an appealing clutter. Therefore, the product is depicted as a necessity, not a luxury. The product is in use, showing that that the product does its job. The symmetry, compact shape of food and canister, and the space create a sense of efficiency, exactness and practicality. As a result the expressions and actions efficiently promote the product. The use of logos does not prevent the clandestine entrance of fallacious appeals in the Brabantia ad. The objectiveness of the ad's message leads to the use of misdirected fallacies in the caption. Formerly, the caption is divided into three segments. The dimension and bold font of the name of the company draws the immediate attention of the reader. ...read more.

Fallacies such as false analogy, non-sequitur, and questionable authority are used to try and assure the reader of the product's durability. The company name creates an illusion of reliability, and the middle segment contains a complex question, as it leads the reader into thinking about one aspect. The world today is in a state of transition in every field. This transitional phase is sped along because of the innate curiosity of man, and his eagerness to explore anything conceivable. The Brabantia ad appeals to two prevalent curiosities of man, the future and extra terrestrial life forms. This ad depicts man's most popular speculation, about aliens, as a fact, and the simplicity of the layout and the illustration leaves nothing to be explored. The ad provides an answer and leaves no mysteries or surprises. This ad also satisfies man's fascination with the bizarre. The bizarreness of using a product that an alien might use is appealing and amusing to man, and there is a great chance that it would be the reason someone purchases the product. This insight into the appeal of the bizarre reveals an incredible facet of human nature that has recently become more dominant. Man is ready to defy all norms of conservativeness and old fashioned conformity and accept the bizarre as normal. ...read more.