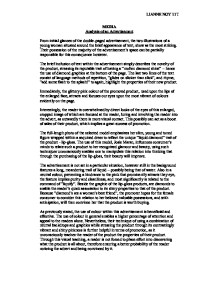 Analysis of an advertisement.

MEDIA Analysis of an Advertisement From initial glances of the double-paged advertisement, the two illustrations of a young woman situated around the brief appearance of text, show as the most striking. Their possession of the majority of the advertisement's space can be partially responsible for this consequence however. The brief inclusion of text within the advertisement simply describes the novelty of the product, stressing its reputable trait of having a "molten diamond shine" - hence the use of diamond graphics at the bottom of the page. The last two lines of the text consist of language methods of repetition, "glides on slicker than slick", and rhyme, "add some flash to the splash!" to again, highlight the properties of their new product. Immediately, the glittery pink colour of the promoted product, used upon the lips of the enlarged face, attracts and focuses our eyes upon the most vibrant of colours evidently on the page. Interestingly, the reader is overwhelmed by direct looks of the eyes of this enlarged, cropped image of which are focused at the reader, luring and involving the reader into the advert, as outwardly there is more visual contact. ...read more.

As previously stated, the use of colour within this advertisement is beneficial and effective. The use of colour in general enables a higher percentage of attention and appeal to the readers alone. Nevertheless, their technique of using a combination of neutral backdrops and graphics while stressing the product through its contrastingly vibrant and shiny pinkness is further helpful in terms of promotion, as it unconsciously teaches the reader of the product the properties of their product. Through this visual teaching, a reader is not forced to place effort into discovering what the product is all about, therefore ensuring a better probability of the reader noticing the advert and being convinced by it. The lighting in this advert is used to primarily emphasize the shiny and glossy trait of the product being promoted. Additionally, lighting was used during the photography stage, when the model was taken. With correct precision of lighting, one can easily reduce, if not completely eliminate, blemishes upon the skin's surface and provide a smooth and appealing complexion. This aids the selling of the product, as the reader wants to relate the product to that of a model with glamorous looks, lighting used within photography has aided this. ...read more.

I don't believe the product is aimed at a particular age group, though I would focus it upon the young generation. The use of the model, Josie Maran, though estimated to be in her late twenties, she stands as a role model for those who are younger, and an inspirational glamour model to those similarly aged. I believe this publication would primarily appear within the middle pages of a reputable brand of magazine, e.g. "Cosmopolitan", directed towards older teenagers and young woman, as this vast group of females are their approximate target. Readily available in all newsagents or bookshops, the magazine will additionally aid sales as they can be interpreted as being recommended by the magazines. All these efforts and abundant spending are all in aid of a successful attempt of promotion of their novelty product, and generally it all comes down to model you place in the advertisement. The more recognized the person, the better sales will be, as it is proven that our present society wishes to purchase a product that claims the assurance of a recognized and appreciated celebrity. It is all down to whom you know in show business... LIANNE NOY 11T ...read more.