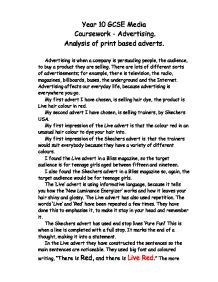 Analysis of print based adverts.

Year 10 GCSE Media Coursework - Advertising. Analysis of print based adverts. Advertising is when a company is persuading people, the audience, to buy a product they are selling. There are lots of different sorts of advertisements; for example, there is television, the radio, magazines, billboards, buses, the underground and the Internet. Advertising affects our everyday life, because advertising is everywhere you go. My first advert I have chosen, is selling hair dye, the product is Live hair colour in red. My second advert I have chosen, is selling trainers, by Skechers USA. My first impression of the Live advert is that the colour red in an unusual hair colour to dye your hair into. My first impression of the Skechers advert is that the trainers would suit everybody because they have a variety of different colours. I found the Live advert in a Bliss magazine, so the target audience is for teenage girls aged between fifteen and nineteen. I also found the Skechers advert in a Bliss magazine so, again, the target audience would be for teenage girls. The 'Live' advert is using informative language, because it tells you how the 'New Luminance Energizer' works and how it leaves your hair shiny and glossy. The Live advert has also used repetition. The words 'Live' and 'Red' have been repeated a few times. ...read more.

The Live advert takes up the whole page apart from the border at the bottom with the company name, "Schwarzkopf" on it. The effect of this is that they want the company name to stand out as well as the product and to be separate from the product. The Skechers advert takes up the whole page, the effect of this is that they want the whole advert to stand out. The Live advert is in colour. The advert needs to be in colour so then people would know what the product looks like. If this advert wasn't in colour then nobody would go out and buy it. The advert is in colour because it's selling hair colour and the company needs to show us what the colour looks like. The Skechers advert is in colour so you can seethe different colour trainers, also adverts need to be in colour so it can stands out and catch your attention. In both of the adverts they have shown us a picture of the product that they are selling so we can see what it looks like. In the Live advert it has pictures of the packaging, so if you want to buy it you know what it looks like. They haven't shown the packaging in the Skechers advert, but the packaging would be a shoebox and you don't need a picture to show it. ...read more.

In this case they have used Britney Spears. I found the Live advert and the Skechers advert in a Bliss magazine. Both of the adverts fit into this magazine because, they are trying to sell to teenagers so they put the advert in a magazine that teenagers read. It's no point putting the adverts into a gardening magazine because gardeners aren't the target audience. The target audience for the Live advert is for teenage girl's aged between fifteen and twenty-four. The target audience for the Skechers trainers is for teenage girl's aged between thirteen and twenty-nine. The Live advert is trying to sell us the product using attractive people and romance because the boy's are attracted to the girl's, so if you get this product then boy's would be attracted to you. In conclusion: I think that the Live advert is good because it's got a lot of information in it. The Skechers advert is good because they look like they are having fun and makes you buy it because you want to have fun. I would buy both of the adverts but if I had to chose one I would chose the Live advert because it persuaded me the most. I didn't chose the Skechers advert because there are so many trainers on the market to chose from also I didn't think the advert pursued me the most. I think both of the adverts would appeal to the target audience because it appealed to me, so if it's good enough for me it's good enough for anyone else. ...read more.