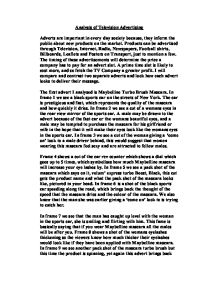 Analysis of Television Advertising Adverts are important in every day society because, they inform the public about new products on the market. Products can be advertised through Television, Internet, Radio, Newspapers, Football shirts, Billboards, Leaflets and Posters on Transport, just to mention a few. The timing of these advertisements will determine the price a company has to pay for an advert slot. A prime time slot is likely to cost more, and so fetch the TV Company a greater profit. I will compare and contrast two separate adverts and look how each advert looks to deliver their message. The first advert I analysed is Maybelline Turbo Brush Mascara. In frame 1 we see a black sports car on the streets of New York. The car is prestigious and fast, which represents the quality of the mascara and how quickly it dries. In frame 2 we see a cut of a womans eyes in the rear view mirror of the sports car. A male may be drawn to the advert because of the fast car or the womans beautiful eyes, and a male may be tempted to purchase the mascara for his girlfriend or wife in the hope that it will make their eyes look like the womans eyes in the sports car. ...read more.

Frame 7 shows the teenagers sprinting on to the football field, looking refreshed. Frame 8 shows all 5 of the greens player's spectacular goals against the blues to go 5-2 up. The Greens team leader then says, 'Cola Zola, it's full of energy and vitamins, as you can probably see'. This shot lets the audience see how much better this drink could make you. In Frame 9 we see a pack shot of the Cola Zola drink, it is practically filling up the screen and on the bottom of the screen it says, it tastes like coke but its sugar free, it's full of vitamins and energy, its Cola Zola. This cut lets the viewers see what the Cola Zola looks like, whilst reminding the viewers about the drink. My Evaluation: the advert that I made up for a fizzy drink had to be easy to remember, so I thought of a rhyming name such as Cola Zola, I used the same type of technique as the two that I did analyse, by constantly repeating the name of the product I am trying to advertise and what it does. I had to tell the viewers why they should buy my product and make the advert interesting so they viewers would sit down and actually watch what is happening during my advert. BY LOUIE ELLIS ...read more.