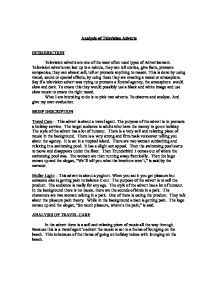 Analysis of Television Adverts INTRODUCTION Television adverts are one of the most often used types of Advertisement. Television adverts can last up to a minute, they can tell stories, give facts, promote companies, they can almost sell, tell or promote anything to reason. This is done by using visual, sound or special effects, by using these they are creating a mood or atmosphere. Say if a television advert was trying to promote a funeral agency, the atmosphere would slow and dark. To create this they would possibly use a black and white image and use slow music to create the right mood. What I am intending to do is to pick two adverts. To observe and analyse. And give my own evaluation. BRIEF DESCRIPTION Travel Care: - This advert is about a travel agent. The purpose of the advert is to promote a holiday service. The target audience is adults who have the money to go on holiday. ...read more.

The characters are two women talking in a park. One of them is eating the product. They talk about the pleasure pain theory. While in the background a man is getting pain. The logo comes up and the slogan, "So much pleasure, where's the pain," is said. ANALYSIS OF TRAVEL CARE In the advert there is a soft and relaxing piece of music all the way through. Because this is a travel agent's advert the music is set to a theme of lounging on the beach. This is because of the theme of going on holiday mixes with lounging on the beach. In the advert there is a voice over telling facts about the travel agents. I think this is done because if the two characters said the information this wouldn't create the effect of them being relaxed on holiday. At the start of the advert this wouldn't quite catch your attention. There is no element of surprise so that it can catch your attention, it is almost soundless. ...read more.

This advert is really a one-off. EVALUATION I have come to the conclusion of when you promote or sell a product of any kind, the advert has to start of with a bang, it has to catch the consumers attention. If not the advert can be a waist. Both of the adverts I analysed did not catch my attention so I wasn't really interested as much as I could have done if the advert started of with a bang. The main difference between the two adverts was that the Travel Care information was given out by a male voiceover where as the Muller Light advert information was given out by form of a conversation. The Muller Light advert gave me much more of an impact because of the conversation. I think this is because it can be some peoples instink to try and listen to other peoples conversations. Overall I prefer the Muller Light advert. This is because it made much more of an impact on me and by doing this I have paid more attention to the advert while watching it. ...read more.