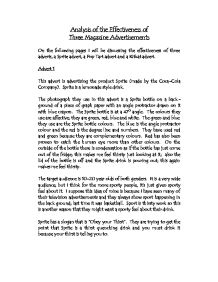 Analysis of the effectiveness of three magazine advertisements.

Analysis of the Effectiveness of Three Magazine Advertisements On the following pages I will be discussing the effectiveness of three adverts, a Sprite advert, a Pop Tart advert and a Kitkat advert. Advert 1 This advert is advertising the product Sprite (made by the Coca-Cola Company). Sprite is a lemonade style drink. The photograph they use in this advert is a Sprite bottle on a back- ground of a piece of graph paper with an angle protractor drawn on it with blue crayon. The Sprite bottle is at a 470 angle. The colours they use are affective; they are green, red, blue and white. The green and blue they use are the Sprite bottle colours. The blue is the angle protractor colour and the red is the degree line and numbers. They have used red and green because they are complementary colours. Red has also been proven to catch the human eye more than other colours. On the outside of the bottle there is condensation as if the bottle has just come out of the fridge; this makes me feel thirsty just looking at it; also the lid of the bottle is off and the Sprite drink is pouring out; this again makes me feel thirsty. ...read more.

The background that the CD case is on is different blue shaded heart shape. Again this advert uses red on the CD case because it has been proven to catch the human eye. The target audience for this product is 8-20 year olds. The target audience of this product ties in with the U.S.P. The first part of the U.S.P is that they are for a younger age group because of their modern approach. They are called "Pop Tarts". You can take the word pop in two ways: one is where they 'pop' out of the toaster and two is the modern look, 'pop' as in pop music in the charts. They have conveyed this by using the CD case and the text below. It appeals to the younger generation again because of the easiness to eat. This is another U.S.P. They come straight out of the packet and then they can be eaten or they can be 'popped' in the toaster and eaten warm. This appeals to people because you can get up late and still eat something before you have to dash off. The use of text in this advert is interesting. Under the CD case are the words "The Debut Album: Love at First Bite". ...read more.

The text itself means nothing, you have to think about it. The idea is that someone is trying to memorise all of the moves that are on the page, and that is very stressful. Nestle are saying 'Have a break' by eating a KitKat. The U.S.P is the name KitKat because it is the famous chocolate bar from Nestle. Also it is a light snack that can be eaten during a break; more to the point, you should have a break just to eat a KitKat. The overall image of the advert is high quality. It advertises KitKat well because the new computer controller was the thing that drew me to the advert because I have a computer console machine and I could therefore relate to the advert. Unfortunately, if I did not own a computer console I would not have noticed it as quickly. The Most Effective Advert I believe the most effective advert was Sprite because I feel that people will like the humour that it captured. The colours used were complimentary which makes the advert look interesting; the colours also catch the eye. The Sprite poring out of the bottle and the moisture on the outside of the bottle make you feel thirsty just looking at the advert. The name Sprite also helps because it's a fashionable well-known name. ...read more.