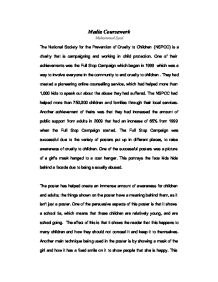 Analysis of the NSPCC poster campaign against child abuse.

Media Coursework Muhammad Syed The National Society for the Prevention of Cruelty to Children (NSPCC) is a charity that is campaigning and working in child protection. One of their achievements was the Full Stop Campaign which began in 1999 which was a way to involve everyone in the community to end cruelty to children. They had created a pioneering online counselling service, which had helped more than 1,000 kids to speak out about the abuse they had suffered. The NSPCC had helped more than 750,000 children and families through their local services. Another achievement of theirs was that they had increased the amount of public support from adults in 2009 that had an increase of 65% from 1999 when the Full Stop Campaign started. ...read more.

One of the persuasive aspects of this poster is that it shows a school tie, which means that these children are relatively young, and are school going. The effect of this is that it shows the reader that this happens to many children and how they should not conceal it and keep it to themselves. Another main technique being used in the poster is by showing a mask of the girl and how it has a fixed smile on it to show people that she is happy. This means that the girl shows everyone how she is happy by smiling on the outside but on the inside, she is feeling a lot of pain because of what she has gone through. ...read more.

This can be interpreted as the background of the girl which was once filled with love and happiness. The final persuasive technique being used is the text in the poster. The text adds persuasiveness to the poster, as it is stating that helpline is available to call, and people are ready to listen to your problems. This satisfies the people in a way because they now know that there is someone who can help them and they will not be judged by what they are going through. It is NSPCC's way of telling children that talking is the first step in overcoming your problems, and ultimately solving them. The text has purposely been written in bold lettering, to catch the readers' eyes. Overall, the poster has been an influential technique by the NSPCC, into making children and adults understand the importance again child abuse. ...read more.