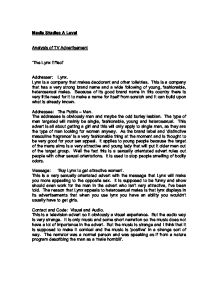 Media Studies A Level Analysis of TV Advertisement 'The Lynx Effect' Addresser: Lynx. Lynx is a company that makes deodorant and other toiletries. This is a company that has a very strong brand name and a wide following of young, fashionable, heterosexual males. Because of its good brand name in this country there is very little need for it to make a name for itself from scratch and it can build upon what is already known. Addressee: The Public - Men. The addressee is obviously men and maybe the odd burley lesbian. The type of men targeted will mainly be single, fashionable, young and heterosexual. This advert is all about getting a girl and this will only apply to single men, as they are the type of men looking for women anyway. ...read more.

It is supposed to be funny and show should even work for the man in the advert who isn't very attractive, I've been told. The reason that Lynx appeals to heterosexual males is that lynx displays in its advertisements that when you use lynx you have an ability you wouldn't usually have to get girls. Contact and Code: Visual and Audio. This is a television advert so it obviously a visual experience. But the audio way is very strange. It is only music and some short narration so the music does not have a lot of importance in the advert. But the music is strange and I think that it is supposed to make it comical and the music is 'positive' in a strange sort of way. ...read more.

He looks normal but there is an interesting twist, the fact that has very long toenails! This tries to be different from the usual way to courting a girl but it is still successful, like Lynx. The Woman The girl is very attractive and she would be a target for many men. She would be the sort of 'dream woman' of most guys and therefore she would appeal to a large group of people. This would catch the eye of a young men 'channel flicking' and they would watch the rest of the advert. When he taps his feet on the floor all of the women in the room are interested. This shows that it has a universal effect, like Lynx. By Matthew Williams and Adam Davies ...read more.

Although this essay shows an understanding of how the advert might appeal to its target audience, there is very little media language employed in the analysis.
***