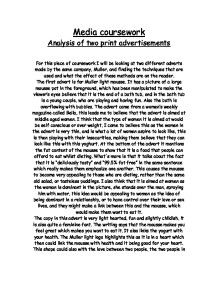 Media coursework Analysis of two print advertisements For this piece of coursework I will be looking at two different adverts made by the same company, Muller, and finding the techniques that are used and what the effect of these methods are on the reader. The first advert is for Muller light mousse. It has a picture of a large mousse pot in the foreground, which has been manipulated to make the viewer's eyes believe that it is the end of a bath tub, and in the bath tub is a young couple, who are playing and having fun. Also the bath is overflowing with bubbles. The advert came from a women's weekly magazine called Bella, this leads me to believe that the advert is aimed at middle aged women. I think that the type of women it is aimed at would be self conscious or over weight, I came to believe this as the women in the advert is very thin, and is what a lot of women aspire to look like, this is then playing with their insecurities, making them believe that they can look like this with this yoghurt. ...read more.

In this picture the women is acting in a very sexy manner, this means that it could appeal to women - eat this yogurt and you will act like this, but also it would make it appeal to men - eat this and you can get a women like this, or if your girlfriend/wife eats this they will behave like this. The bubbles around the bath tub symbolise the bubbles in the mousse, and they look fluffy and light, so the advert is putting across the message that the mousse is fluffy and light. The colours of the advert are very modern; the walls are blue, and there are lots of silver fittings and a wooden floor. The colours of the walls are all bathroom colours which adds a soothing and more relaxed feeling to the advert. The people stand out as they have had a light shone on them, this causes them to stand out and look very warm, contrasting against the colder colours of the background. This is appealing as these colours are bright and cheerful, happy colours. The writing is also very bold and stands out against the background. ...read more.

The man is dressed in a suit which suggests that he is a professional business man and leads you to believe that they must be wealthy. The copy in this advert is very similar to the copy of the first advert, although in the line where it reads "deliciously tasty, 99.5% fat free" on the first, it reads "deliciously tasty, virtually fat free". This is suggesting that it is still very tasty even though it has very little fat in it, although it is not stating the amount of the yoghurt that is fat free. The two adverts for these yoghurts are very similar. Although the background of the image, the women, and the type and flavour of the yoghurt do change, the meaning behind them remains the same. Both of these adverts hold the women as the dominant character, in control of the man, so they are mainly aimed at women. Another thing that they have in common is that the man and woman are together in them, symbolising love, and both of these images are slightly s****l. They both contain the same slogans and symbol in the bottom corner. Both the adverts use the same techniques, they play with people's insecurities making them want to buy the product. By Faye Jackson 10B1 ...read more.