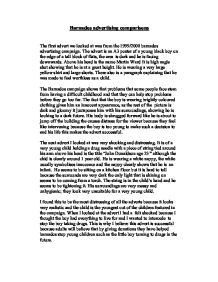 Barnados advertising comparisons The first advert we looked at was from the 1999/2000 barnados advertising campaign. The advert is an A3 poster of a young black boy on the edge of a tall block of flats, the area is dark and he is facing downwards. Above his head is the name Martin Ward It is high angle shot showing that he is at a great height. He is wearing a very large yellow shirt and large shorts. There also is a paragraph explaining that he was made to feel worthless as a child. The Barnados campaign shows that problems that some people face stem from having a difficult childhood and that they can help stop problems before they go too far. The fact that the boy is wearing brightly coloured clothing gives him an innocent appearance, as the rest of the picture is dark and gloomy it juxtaposes him with his surroundings, showing he is looking to a dark future. His body is shrugged forward like he is about to jump off the building the causes distress for the viewer because they feel like intervening because the boy is too young to make such a decision to end his life this makes the advert successful. ...read more.

When I looked at the advert I had a felt shocked because I thought the boy had everything to live for and I wanted to intercede to stop the boy taking drugs. This is why I believe this advert is successful because adults will believe that by giving donations they have helped barnados stop young children such as the little boy turning to drugs in the future. The adverts also have some hidden messages within the language, they give us a feeling that the graphical picture they have shown aren't the way that things have to happen and that with barnados help the reader can change their future by donating. In every advert there is the same paragraph about the child individual situation and how barnados helps children with similar text, "it was always possible" this implies that it is not a certainty that the child has an unhappy adulthood but that it is a possibility, the word "help" is repeated several times to connote that we as the reader are the only ones that can help barnados to help the children. We are put into a powerful position. ...read more.

They are young children with names and an age in their twenties above them, the barnados logo and slogan "Giving Children back their future" Both of the boys look illuminated compared with their surroundings which gives them their innocent quality in their picture, they are also clean although their surroundings are dark and dingy, both of the children are isolated, Both paragraphs start with " it was always possible that". The adverts are also different which shows the children's individual scenario Martin is In a large open space while john is in a closed, confined space and martin looks to be quite older than john. I believe that both the adverts are shocking and effective but the narrative with john Donaldson was the most effective because of his age, most people like the sight of a newborn baby starting out life, and they would sympathise with such a young child than anyone else but to see one in the circumstances of taking drugs proves very disturbing which would make quite a few people want to take action to stop it which would bring. donation to the company, Overall I believe the adverts were made to shock the audience into donating towards the children. ...read more.