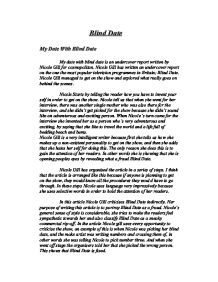 Blind Date My Date With Blind Date My date with blind date is an undercover report written by Nicole Gill for cosmopolitan. Nicole Gill has written an undercover report on the one the most popular television programmes in Britain; Blind Date. Nicole Gill managed to get on the show and explored what really goes on behind the scenes. Nicole Starts by telling the reader how you have to invent your self in order to get on the show. Nicole tell us that when she went for her interview, there was another single mother who was also there for the interview, and she didn't get picked for the show because she didn't sound like an adventurous and exciting person. ...read more.

In these steps Nicole uses language very impressively because she uses selective words in order to hold the attention of her readers. In this article Nicole Gill criticises Blind Date indirectly. Her purpose of writing this article is to portray Blind Date as a fraud. Nicole's general sense of style is considerable, she tries to make the readers feel sympathetic towards her and also classify Blind Date as a sneaky commercial rip-off. In the article Nicole gill uses every opportunity to criticise the show, an example of this is when Nicole was picking her blind date, and the make artist was writing numbers and crossing them of, in other words she was telling Nicole to pick number three. ...read more.

My point of view toward the way Nicole Gill presented the article is that she did a good of it. Nicole proves to her readers that Blind Date is a written formulaic, but never the less she use a formulaic approach herself in order to write her article. I think that the Blind Date crew were upset regardless to the way Nicole Gill had approached them. I think that if they weren't upset they wouldn't have got their own back on Nicole by embarrassing her on Television. I conclude that Blind Date is a fixed show, which is lying to its audience. And they way Nicole Gill unmasked Blind Date was excellent, because even though Nicole Gill used a formulaic approach in uncovering Blind Date she did it so people would know what really goes on behind the scenes. Created By Salman Qureshi ...read more.