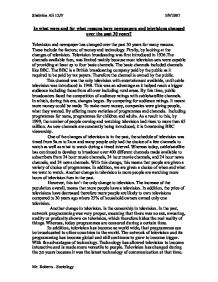 changes in tv and radio

In what ways and for what reasons have newspapers and televisions changed over the past 30 years? Television and newspaper has changed over the past 30 years for many reasons. These include the factors; of money and technology. Firstly, by looking at the changes of television. Television broadcasting was first introduced in 1936.The channels available then, was limited mainly because most television sets were capable of providing at least up to four basic channels. The basic channels included channels like BBC. The BBC is a British broadcasting company paid by the public as it required to be paid by tax payers. Therefore the channel is owned by the public. This channel was the only television with entertainment available, until cable television was introduced in 1948. This was an advantage as it helped reach a bigger audience including those from all over including rural areas. By this time, public broadcasters faced the competition of audience ratings with cable/satellite channels. In which, during this era, changes begun. By competing for audience ratings. It meant more money could be made. To make more money, companies were giving people, what they wanted. By offering more varieties of programmes and channels. Including programmes for teens, programmes for children and adults. As a result to this, by 1999, the number of people owning and watching television had risen to more than 65 million. As new channels are constantly being introduced, it is threatening BBC viewership. One of the changes of television is in the past, the schedule of television was timed from 9a.m to 2a.m and many people only had the choice of a few channels to watch as well as what to watch during a timed interval. Whereas today, cable/satellite has continued to develop to broadcast over 400 different channels made available to subscribers from 24 hour music channels, 24 hour movie channels, and 24 hour news channels, and 24 news channels. ...read more.

With this change, this means that people are given a variety of choice of programmes. In addition, we are given a choice of when and what we want to watch. Another change in television is more people are watching more hours of television then in the past. However, this isn't the only change to television. The increase of the population overall, means that more people have a television. In addition, the price of televisions have decreased therefore more people are likely to own televisions compared to 30 years ago where 25% of household owners owned only one television. Another change in television. Is the censorship in television. In the past, network programming was very proper, meaning that there was no sex, swearing, nudity or profanity shown on television, which therefore hides the real reality of things. Whereas, today programmes are censored during a certain time. In addition, television has become so world wide, that programmes can be broadcasted to other countries in the world. The network of television and its programming has become global and still continues to grow to become bigger. With the advantages of technology. Technology has allowed television to become interactive and is made more versatile to people. Television has changed during the 30 years because it was the latest technology of communication at that time. Lastly, because of the success of television, the ways of communication has advanced furthermore. With the power of technology, other ways of communication has been made, e.g. the internet and mobile phones etc in which to have the same success rate as it did as when television was marketed out. In addition, television has had some influence in our ideas and behaviour. More programmes are made in which to make people aspire there own ideas as well as to be influenced. In conclusion, the reason why television has changed over years varies. From the money made, involving television broadcasting/programming to the advances of technology. Whereas on the other hand, newspaper has not changed during time. ...read more.

The British press history does tend to repeat itself. E.g. the endless violence, war, politics etc. And it is seen as though lessons are not learnt. This would have been the same news years ago too. However in general, newspapers have had to compete with other media such as television with 24 hours news, radio and internet. This would not have been the issue 30 years ago where newspapers was one the only sources in which to find the latest news and was a source of communication. However in modern day society, versatility has become an issue, therefore some newspapers in a broadsheet format or formally known as Berliner have changed to a tabloid format in which to make it more convient and readable for commuters. Another change in newspapers in that there is more of a variety to read then there was before. Therefore allowing people a freedom of choice of what to read. Newspapers today, do not just inlclude just news of politics anymore. There are newspapers available with only gossip etc. Therefore bringing the issue of variety in newspapers.The numbers of people reading newspaper has declined due to the other ways people chose to find the latest news, gossip, sports news etc. Which include through mobile phones and the internet etc. In addition, more newspapers have been made readly prepared free online. In conclusion, newspapers are not seen as a serious media source as it was before, due to the fact of variation in newspapers. More and more newspapers are being dedicated to a variety of topics such as the daily star, with topics of gossip and celebrities and the news. In which, to attract more people to read the newspaper. People are more interested to know more about a variety of things. In addition to, more people are reading tabloid newspapers rather than broadsheets due to the reason of time. Newspapers have changed with time in which to fit in with modern life and lifestyles. People do not have the time and energy to read long newspapers. Shabrina Ali 12JY 5/9/2007 Mr. Roberts - Sociology 1 ...read more.