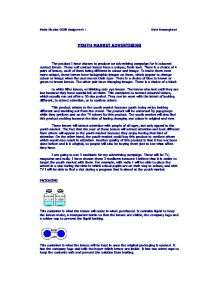 Media Studies GCSE Assignment 1 Nima Nasserghasri YOUTH MARKET ADVERTISING The product I have chosen to produce an advertising campaign for is coloured contact lenses. These soft contact lenses have a unique, fresh look. There is a choice of 4 pairs of lenses, each of them being different in colour and image. To make them even more unique, these lenses have holographic images on them, which appear to change colour or image when the user moves their eyes. There is a choice of blue to brown or green to brown lenses. The other pair have changing images. There is a choice of a black to white Nike lenses, or blinking cats eye lenses. The lenses also last until they are lost because they have special ink on them. This compares to normal coloured lenses, which usually run out after a 30-day period. They can be worn with the intent of looking different, to attract attention, or to confuse others. This product relates to the youth market because youth today enjoy looking different and standing out from the crowd. The product will be endorsed by pop-groups while they perform and on the TV advert for this product. The youth market will also find this product exciting because the idea of having changing eye colour is original and new. ...read more.

My magazine advert will be in magazines aimed at the youth market such as 'playstation' magazine or 'mizz'. This product is aimed at both genders, so the advert will be put in magazines that attract both genders. My aim with these adverts is to make people aware of the product and introduce it to the target audience. Radio This advert will be played on 96.3 Aire FM because the results of my survey show that the majority of my target audience listen to this station. The advert will be played twice between 7:30 and 8:30 in the morning and twice between 15:00 and 16:00 in the afternoon. I have chosen these times because they are the times at which pupils are getting lifts to and from school in their cars. This means that the advert is likely to be played and heard by the intended audience through car radios, or Walkman. This advert will be soft-sell because the identity of the product will be revealed gradually. There will be a song, which will be sung by a pop group for the duration of the whole advert and at the end there will be 3 voice-overs to inform and persuade the audience about the product. The song will be 'eye of the tiger', and towards the end of it, the volume of the song will go lower for the voice-overs. ...read more.

Then the slogan (eye see eye change) and the product (in its packaging) will be shown at the bottom of the screen, and the stars will all say the slogan. The final voice will be of one of the stars telling the audience that the product is available at all top clothes stores. This advert will again be soft-sell as the name of the product will only be revealed at the end of the advert. This advert is meant to attract the audience's attention at the beginning, when they see the close-up of the eyes changing colour, and then once it has their attention it will inform them about the product and introduce them to it. Magazine This advert will be placed in 2 magazines. One will be a magazine aimed at a female audience, and the other will be aimed at a male audience. For example, 'playstation' magazine and 'mizz' magazine. The advert will be a still image from the ending of the TV advert, which will be a plain white room with a round stage in the centre. The pop group that is endorsing this product will be on the stage and the slogan and product (in its packaging) will be below them. This image will be a long shot, leaving space above and below the subject, which is the pop group. The advert will be a full page spread. ...read more.