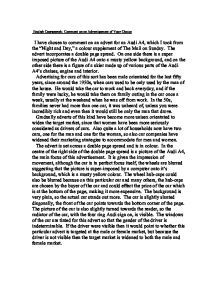 English Coursework: Comment on an Advertisement of Your Choice I have chosen to comment on an advert for an Audi A4, which I took from the "Night and Day," a colour supplement of The Mail on Sunday. The advert incorporates a double page spread. On one side there is a super imposed picture of the Audi A4 onto a musty yellow background, and on the other side there is a figure of a skier made up of various parts of the Audi A4's chaises, engine and interior. Advertising for cars of this sort has been male orientated for the last fifty years, since around the 1950s, when cars used to be only used by the man of the house. He would take the car to work and back everyday, and if the family were lucky, he would take them on family outing in the car once a week, usually at the weekend when he was off from work. In the 50s, families never had more than one car, it was unheard of, unless you were incredibly rich and even then it would still be only the man that drove. Gradually adverts of this kind have become more unisex orientated to widen the target market, since that women have been more seriously considered as drivers of cars. ...read more.

This picture has the sole purpose of interesting a potential buyer scrolling through a magazine, because it is unusual, imaginative and interesting. It will also keep the reader on this page while they figure out what parts of the car have been used to symbolise parts of the skier, his clothing and skis. This means that when the reader has finished their interest in the ski figure then they may look at the main focus of this advertisement; the picture of the car, and then read through the advert and information about the car itself. This is an inventive, innovative and highly original advert although it uses the same technique that quite a lot of companies use to sell their products. The reader is drawn to the advert by an object of interest, which is not the main focus of the advert at all, and then reads on to notice the product itself. Audi use this same method of advertising for another advert for the Audi A4 that also has a figure made out of parts of the car, this time of a kangaroo carrying a baby kangaroo in its pouch. In the figure of the skier, the main feature advertised in this advert, the Audi A4's 'Multitronic gearbox,' forms the main lower legs of the skier and is the largest object in the figure, and so attracts the reader. ...read more.

It can be used to attract the reader because when they see it, they become interested and try to guess what it means. It serves as a device for keeping the attention of the reader for a few more seconds, which can be vital. As a result of this advert someone may go on to evidently chose to buy this car and so the advert serves it's purpose. Next to the German slogan, in small, red san-serif font is a web site address, 'www.audi.co.uk.' This shows that the company has established itself on the Internet and so is a modern company. It also serves as a source of additional information for the reader, which again may lead to the purchase of the advertised car, or even another Audi model found on the internet through this address. Underneath the web site address and the slogan are some small informative details in small, black san-serif font. They are important details about the VAT included in the price of the car and that the car comes with a 'free tank of fuel, number plates, road fund license and first registration fee.' These important details are not large and readily visible to the reader because the aim of the advert is to create interest in the car, and so the details are only read by the reader if they are interested, and have actually read thoroughly through the advert. ...read more.