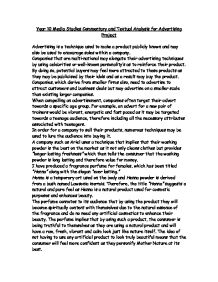 Year 10 Media Studies Commentary and Textual Analysis for Advertising Project Advertising is a technique used to make a product publicly known and may also be used to encourage sales within a company. Companies that are multi-national may elongate their advertising techniques by using celebrities or well-known personality's as to reinforce their product. By doing so, potential buyers may feel more attracted to these products as they may be publicised by their idols and as a result may buy the product. Companies, which derive from smaller firms also, need to advertise to attract customers and business deals but may advertise on a smaller scale than existing larger companies. When compelling an advertisement, companies often target their advert towards a specific age group. For example, an advert for a new pair of trainers would be vibrant, energetic and fast paced as it may be targeted towards a teenage audience, therefore including all the necessary attributes associated with teenagers. In order for a company to sell their products, numerous techniques may be used to lure the audience into buying it. A company such as Ariel uses a technique that implies that their washing powder is the best on the market as it not only cleans clothes but provides "longer lasting freshness" which then tells the consumer that the washing powder is long lasting and therefore value for money. ...read more.

This product is aimed at mature females ranging between the ages of 26-31. The fragrance is mainly designed for women who are possibly earning a disposable income and find themselves secure with a career and are able to indulge in perfumes. The fragrance is not designed as a first perfume but is for women who have matured and are perhaps in search of a varied fragrance rather than the mundane fragrances available on the market today. This message has been sent across to the audience by promoting the perfume in a unique style from existing fragrances by using natural surroundings which have not been tampered with to create a specific look but letting nature take its course and helping to enhance the appeal of the fragrance. Ideally, women of this age bracket already have a stylised image for themselves and the fragrance would be a product they buy to complement their image. The fragrance may work on two ways. For the younger woman in her late twenties who may be in a serious relationship or who is looking to find a suitable partner, it may help them feel more confident and content with themselves. For women in their early thirties who may lead hectic lifestyles with a career and a family, the perfume ables them to escape from their hectic lives and makes them feel refreshed and vibrant. ...read more.

I then decided to take a different approach to the project and introduced a subtle colour scheme, generally toning the whole look down. This proved more successful as the adverts conceived appeared more professional. I took a few photographs outdoors, placing the bottle in a tree and this proved to be the best image in my opinion as it boasted of a certain rawness and freshness. The rest of the images were taken indoors creating illusions of the different seasons using fresh leaves and fabrics. Due to some technical difficulties such as the computer not saving my work, I lost numerous photographs and therefore had to retake some of my images. Another obstacle was that one of my adverts did not successfully open up on the computer and this then meant that I had to reproduce a replica of my advert which did not prove time efficient. I created my adverts on Microsoft Photodraw and as I was familiar with this computer package I found it easy to enhance my work by adjusting brightness and contrast and generally manipulating each image to improve the look. I am generally satisfied with my work but in order to improve it, I would prefer to take every photograph in completely natural environments and not have to create illusions of any seasons. Overall, I feel the project was a success and I managed to overcome most of the problems I encountered and produce a sophisticated advert campaign for a female perfume. ...read more.