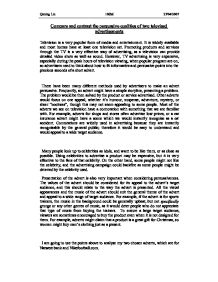 Compare and contrast the persuasive qualities of two televised advertisements.

Compare and contrast the persuasive qualities of two televised advertisements Television is a very popular form of media and entertainment. It is widely available and most homes have at least one television set. Promoting products and services through the TV is a very effective way of advertising, as a television can provide detailed video shots as well as sound. However, TV advertising is very expensive, especially during the peak hours of television viewing, when popular program are on, so advertisers need to think about how to fit informative and persuasive points into the precious seconds of a short advert. There have been many different methods used by advertisers to make an advert persuasive. Frequently, an advert might have a simple storyline, presenting a problem. The problem would be then solved by the product or service advertised. Other adverts would focus on one appeal, whether it's humour, suspense, adventure, mystery, or sheer "coolness", though this may not seem appealing to some people. Most of the adverts we see on television have a connotation with something that we are familiar with. For example, adverts for shops and stores often advertise low prices, or a car insurance advert might have a scene which we would instantly recognise as a car accident. ...read more.

All of the above descriptions form a very stereotypical image of a Londoner, promoting values of honesty, loyalty and the importance of every individual "regular Joe". The advert then focuses on individual banking problems which Natwest solves for its customers. One is the frequent change of bank managers, with the cabbie meeting three different bank managers in succession, and conversing with three different bank phone operators, last of which is in Bombay. These examples give a humorous representation of common banking problems, emphasising each problem by giving three examples of each problem is also very effective. There are also several puns in the advert. For example, when the cabbie receives a letter from his old bank stating that he would be "re-routed through a dedicated advice centre", the camera focuses on the "diversion" road sign, linking the two problems. Also, when he is receiving a tip from his passenger, he says, "Want my tip? Try another bank." To explain Natwest's solutions to the problem, the camera is brought to roadside billboards of Natwest's adverts with specific solutions on them, such as, "Business managers stay in place for 4 years" and "Face to face business advice still free". ...read more.

The Nike advert is also used for entertainment purposes, and the real adverts are in www.nikefootball.com, where the products are presented. In a way, these two adverts completely contrast eachother, as the Natwest advert is based on the theme of being stereotypical and solving a current issue that affects many people, as well as showing the importance of communication. The Nike advert is anything but stereotypical, attracting the audience with its sheer "coolness", and is an advert which people want to watch again and again as they try to master the skills on the advert and be more like their idols. These two adverts are both very appealing and persuasive but the persuasion is delivered in completely different ways. The Natwest advert is persuasive because it makes people want their simple, effective services. The Nike advert is persuasive because it is so cool and fantastical that it makes the viewer want to be part of it. An effective, persuasive advert makes people want the product/service advertised, and changes people's views on the product/service, not forcing people, but making people feel like that it was their own wish. Qiming Liu 10SM 27/04/2007 ...read more.