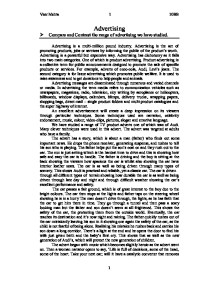 Compare and Contrast the range of advertising we have studied.

Advertising > Compare and Contrast the range of advertising we have studied. Advertising is a multi-million pound industry. Advertising is the act of promoting products, jobs or services by informing the public of the product's worth. Advertising is a powerful but expensive way. Advertising has dichotomy as it falls into two main categories. One of which is product advertising. Product advertising is a collective term for public announcements designed to promote the sale of specific products or services. For example, adverts of coco-cola, Audi, Levi's jeans. The second category is for Issue advertising which promotes public welfare. It is used to raise awareness and to get donations to help people and animals. Advertising messages are disseminated through numerous and varied channels or media. In advertising the term media refers to communication vehicles such as newspapers, magazines, radio, television, sky writing by aeroplanes or helicopters, billboards, window displays, calendars, blimps, delivery trucks, wrapping papers, shopping bags, direct mail - single product folders and multi product catalogues and the super highway of internet. An excellent advertisement will create a deep impression on its viewers through particular techniques. Some techniques used are narration, celebrity endorsement, music, colour, video-clips, pictures, slogan and emotive language. We have studied a range of TV product adverts one of which was of Audi. Many clever techniques were used in this advert. The advert was targeted at adults who have a family. ...read more.

This toothbrush will help them clean thoroughly - even between the gaps!" To target parents it said, "Oral-B Stages 4 Limited Edition 'Incredibles' toothbrush...' as it says that Oral-B toothbrushes are incredible and also cartoon characters 'Incredibles'. It is an effective advert because it targets both children and parents. We have studied a couple of Charity adverts as well; One of which was a TV advert for 'Friends of the Earth' focusing on the deforestation of rainforests. At the beginning an axe was being sharpened. It used narration which said' "Thousands of people are made homeless. They are being robbed of lands, which was their from centuries. One acre of forest land is being razed every second." In the video-clip, we saw elderly legs which were cut by an axe, and then we saw adult legs which were also cut by an axe, and finally we saw the legs of a child which were also cut by an axe. They have used a clever technique by showing legs of different generation cut by an axe to show that it affects us and will affect new generation as well in future. In narration, by using statistics - 'One acre of forest land is being razed every second.' They make people start thinking of future - 'One acre in one second.' ...read more.

It also encourages people to buy products by making them think that purchasing and consuming are the major activities of their lives. It also involves fears of inferiority upon the consumers by showing the normal person as young, attractive, wealthy and successful. This may encourage a person to act on his or desire for success and go out - purchase that particular brand hoping to become like the persons shown in advertisements. In this action, they spend lot of money which is they cannot afford. Moreover, stereotypes lead to amnesia and other confidence problems which can ruin people's life's and may cause in suicide. However, advertising also have good side. Advertising can be used to increase awareness in society about particular issues and in so doing becomes a form of education. Anti-drug advertising such as "It's OK to say No", and drink drinking campaigns are two examples of how society uses the advertising industry as a means of promote public welfare. Advertising is a good way to inform people what is available to buy and if there where no adverts we wouldn't know what to buy or we would have end up buying he same product and not trying any thing different. Things mentioned above depends upon what we see in advertisement - information passed on or characters and their clothes. _____________________________________________________________________ Comments: Effort: Level: ?? ?? ?? ?? Veer Mehta 1 10BB 1 ...read more.