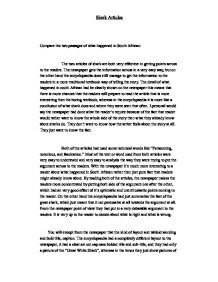 Compare the two passages of what happened in South Africa

Compare the two passages of what happened in South African: The two articles of shark are both very effective in getting points across to the readers. The newspaper gets the information across in a very easy way, but on the other hand the encyclopaedia does still manage to get the information to the readers in a more traditional textbook way of telling the story. The detail of what happened in south African had be clearly shown on the newspaper this means that there is more chances that the readers will prepare to read the article that is more interesting then the boring textbook, whereas in the encyclopaedia it is more like a conclusion of what shark does and where they were seen that often. ...read more.

Both of the articles had used some technical words like "Persecuting, notorious, and fascination." Most of the text or word used from both articles were very easy to understand and very easy to analysis the way they were trying to put the argument across to the readers. With the newspaper it's much more interesting to a reader about what happened in South African rather then just pure fact that readers might already know about. By reading both of the articles, the newspaper makes the readers more concentrated by putting both side of the argument one after the other, which had an very good effect of it's optimistic and unenthusiastic points coming to the reader. ...read more.

The encyclopaedia had a completely different layout to the newspaper, it had a clear set out cap case bolded title and sub-title, and they had only a picture of the "Great White Shark", whereas in the times they just show pictures of the shark without any people or seals getting attached. Only the encyclopaedia had few bullet points of the great shark, however the encyclopaedia only had a very short information on the sharks, but it had it's own purpose for reader. It is not used at the right time against the times newspaper. I think the way both articles was written for a different kind of reader. The newspaper are always trying to catch a wide rage of readers from GCSE onwards, the way the layout of the newspaper ?? ?? ?? ?? Shark Articles ...read more.