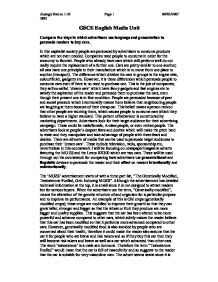 Compare the ways in which advertisers use language and presentation to persuade readers to buy cars.

GSCE English Media Unit Compare the ways in which advertisers use language and presentation to persuade readers to buy cars. In this capitalist society people are persuaded by advertisers to consume products which are not even needed. Companies need people to consume in order for the economy to flourish. People who already have cars which still perform well do not really require the replacement of a further one. Cars are pretty similar to one another; all cars have one principle in their manufacture which is to move from one place to another (transport). The difference which divides the cars in groups is the engine size, colour/finish, gadgetry etc. However, it is these differences which persuade people to consume cars even if there is no need to purchase one. This is the job of companies; they sell so called 'dream cars' which have fancy gadgets and fast engines etc to satisfy the aspiration of the reader and persuade them to purchase the cars, even though their present one is in fine condition. People are persuaded because of peer and social pressure which intentionally makes them believe that neighbouring people are laughing at them because of their cheap car. This belief makes a person reckon that other people are taunting them, which causes people to consume cars which they believe to have a higher standard. This pattern of behaviour is constructed by marketing departments. Advertisers look for their target audience for their advertising campaign. These could be male/female, A-class people, or even retired people. The advertisers look at people's deepest fears and desires which will make the pitch hard to resist and they manipulate and take advantage of people with these fears and desires. ...read more.

Its font size is small since it is not designed to attract readers this is so that readers will not be discouraged in buying the product by looking at a lot of detailed technical information. The detailed technical information is BOW (Black on white), presuming the writing is black and the background is white this is so that the writing is not too bright and eye-catching so it does not attract readers. The main heading, 'The Genetically Modified, Testosterone Fuelled, Grin Inducing MGZS', is WOB (White on black) and is the largest font and brightest since it introduces the car which is advertised to the reader so that the reader knows what car it is. The image of the car is shot from below at an angle that makes the car appear big and shows most of the cars features from the rear spoiler to the head lights. The lighting makes the car shine and stand out since it is shone at a dark background and most of the lighting is shining at the car rather than the whole advert. The image is cropped to exclude any unwanted images so that the advert does not have any unnecessary bits such as excess background. The advertisers only want to show the car, not the background. This is so that the image does not appear to be tedious and blank. The car is shown at an empty background so that the car looks luxurious and the readers will not be attracted to anything else other than the car. Underneath the car in WOB (White on black) and in small font there is the contact information so that readers who are interested in buying can call or go to the website to find information how to buy the car e.g. ...read more.

Thus, it is clear that the advertising media personnel are very good at what they do. They use a wide range of sophisticated, highly developed and linguistic techniques and structural presentation to persuade readers to consume the product which they are advertising. The advertisers make the issues attractive, entertaining and persuasive but yet clever which enriches the reader's life so that the reader cannot resist buying the product. Some advertisers create a false imagery such as the lonely moor in the 'Lexus' advert so that the readers can imagine themselves in that position and so are persuaded in buying the car. However, despite their entertainment value, attractiveness, persuasiveness there are more important issues to think about. In advertising media, people are persuaded covertly to buy things subtly even though they cannot afford the product and the product might well destroy the environment. The advertisers achieve this by their powerful medium which draws on people's deepest fears and desires. For this reason we must be discerning as consumers and critical of advertisers. There are also implications of such powerful advertising techniques for our society. There are environmental concerns like pollution and stereotypes are reinforced e.g. the 'MGZS' advert is very problematic since it is based on the construct of muscularity and it suggests that men are risk takers (Genetically Modified) and are s****l breeders (Testosterone Fuelled) which is s****t and excludes women from the advert. Similarly in the 'Lexus RX300' advert stereotypes of rich people are reinforced by presenting luxury and hunting which relates to prosperous people. This excludes large sections of the society, not only women but disabled people, ethnic minorities and so on. Alomgir Karim 11M Page 1 09/05/2007 3892 ...read more.