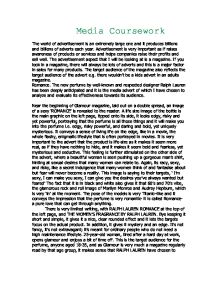 Media Coursework The world of advertisement is an extremely large one and it produces billions and billions of adverts each year. Advertisement is very important as if raises awareness of products or services and helps companies raise their profits and sell well. The advertisement aspect that I will be looking at is a magazine. If you look in a magazine, there will always be lots of adverts and this is a major factor in sales for many products. The target audience of the magazine also reflects the target audience of the advert e.g. there wouldn't be a kids advert in an adults magazine. Romance. The new perfume by well-known and respected designer Ralph Lauren has been deeply anticipated and it is the media advert of which I have chosen to analyze and evaluate its effectiveness towards its audience. Near the beginning of Glamour magazine, laid out on a double spread, an image of a sexy 'ROMANCE' is revealed to the reader. A life size image of the bottle is the main graphic on the left page, tipped onto its side, it looks edgy, risky and yet powerful, portraying that the perfume is all those things and it will make you into the perfume i.e. edgy, risky powerful, and daring and bold, yet uniquely mysterious. ...read more.

The product is in the middle of the page; it looks shiny, smooth and shapely. It is curvaceous perhaps an image of how a healthy woman's body should be. It is pale blue, which suggests a natural beauty, implying maybe the sky or the sea. Giving a bit of s*x appeal is a nice, smooth leg leaping out of the side of the deodorant. It looks like it is running, and the fact that it is wearing heel shoes shows it was not planned and on IMPULSE, reflecting the name of the product. Also the fact that it is running away is a hint at teasing a male and playing hard to get. Again, the nature incentive is enthused by a blue flower with pink extrovert eyes on it. It's almost as if it's saying it will open your eyes to nature, to the good things in life. IMPULSE is written in big spangly writing and it is the biggest font in the whole advert. This hints at it being bold, flirty and impulsive. Underneath, TEASE is written in normal font, so it is metaphorically symbolising the way a lot of girls/women flirt and tease their crushes then get colder, playing hard to get. In a rounded pink box above IMPULSE 'ooh! ...read more.

Both adverts are trying to portray l**t and attraction towards the other s*x. Both these adverts are in Glamour magazine, and I think they fit in very well with the magazine and in the context of where they are, as Glamour readers usually range from 14 to 40, and the ROMANCE will attract the older women between 25 and 40, whereas the IMPULSE will attract the younger women, usually between the ages of 14-24. Both adverts are very appealing and they allure different parts of people in different ways. ROMANCE uses a sexier image of a mature man and woman, whereas IMPULSE uses a naked leg, which has a teasing, younger, fresher feel to it. I like both of these brilliant adverts and they are very effective towards their target audience. They are both very alluring, but I do prefer the IMPULSE one because it is more to my style and ROMANCE is a bit more for older women, the way it is portrayed in the advert. Probably in a few years time I will change my mind but for now I think for me, the most effective for me is IMPULSE. However, I'm not saying that ROMANCE is ineffective, it just doesn't appeal to me as its not really aimed at people my age. ...read more.