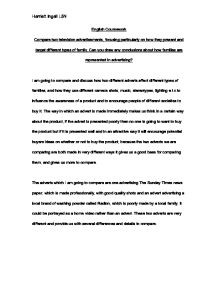 Compare two television advertisements, focusing particularly on how they present and target different types of family. Can you draw any conclusions about how families are represented in advertising?

English Coursework Compare two television advertisements, focusing particularly on how they present and target different types of family. Can you draw any conclusions about how families are represented in advertising? I am going to compare and discuss how two different adverts affect different types of families, and how they use different camera shots, music, stereotypes, lighting e.t.c to influence the awareness of a product and to encourage people of different societies to buy it. The way in which an advert is made immediately makes us think in a certain way about the product, if the advert is presented poorly then no one is going to want to buy the product but if it is presented well and in an attractive way it will encourage potential buyers ideas on whether or not to buy the product, because the two adverts we are comparing are both made in very different ways it gives us a good base for comparing them, and gives us more to compare. The adverts which I am going to compare are one advertising The Sunday Times news paper, which is made professionally, with good quality shots and an advert advertising a local brand of washing powder called Radion, which is poorly made by a local family, it could be portrayed as a home video rather than an advert. ...read more.

The Sunday times advert is produced with great manor and very professionally, the camera is used effectively, there is a backing theme sound and the shots are edited together in a smooth sequence. We can tell that it was filmed with a lot of care and that a lot of effort was put into make it look right and to make it look professional. There are no random cuttings and the editing sequence is nice and smooth, the camera shots which are used are often varied, for example we can see close up, long shot and high angle shots which often dives the viewer an idea of what is to be taken more seriously and what isn't, for example a close up shot will be emphasizing that this is an important part of the advert and should be considered by the potential buyers and example of one of these in the advert could be when the camera does a close up shot on the newspaper when it is fanned out, showing all the sections of the newspaper, this shot is seen many times during the advert which emphasizes to the audience that there is a lot of sections to the newspaper and that there is something for everyone. ...read more.

them or because the Sunday times is far to expensive for any black or mixed race cultures to buy, however I do not think that this is the message that the adverts want to give of. I do not think that the Sunday times wants to give off any message like this, in fact I think it is trying to give of a completely different message, being that the Sunday times is suited for everyone and that everyone should be entitled to buy it, however some people who may watch the advert may believe that the advert is only advertising the Sunday times for upper class people living in large housing and with a high income. Overall I think that we can say that both adverts are of a different genre and are aimed at interesting different buyers to their products. One advert which is obviously aimed at the middle - upper class society, we can tell because of the professionalism of the advert and because the newspaper is created for businessmen and middle - upper class people. And the other which is obviously designed for the lower and working class societies, we can tell this because it is the opposite to the other, unprofessionally made and advertising a cheap unsuccessful product just like the advert. . ?? ?? ?? ?? Harriett Ingall L5N ...read more.