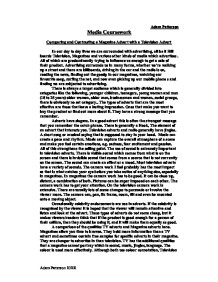 Comparing and Contrasting a Magazine Advert with a Television Advert

Adam Patterson Media Coursework Comparing and Contrasting a Magazine Advert with a Television Advert In our day to day lives we are surrounded with advertising, all be it Bill boards Television, Magazines and various other kinds of media which advertises. All of which are predominantly trying to influence us enough to get a sale of their product. Advertising surrounds us in many forms, whether we're walking up a street and there are billboards, driving in the car and the radio is on, reading the news, finding out the gossip in our magazines, watching our favourite soap, surfing the net, and now even picking up our mobile phones and finding we are subjected to advertising. There is always a target audience which is generally divided into categories like the following, younger children, teenagers, young women and men (18 to 25 years) older women, older men, businessmen and women, social groups, there is obviously no set category.. The types of adverts that are the most effective are those that leave a lasting impression. Ones that make you want to buy the product or find out more about it. They have a strong message that you remember. Adverts have slogans. In a good advert this is often the strongest message that you remember the catch phrase. There is generally a Hook, The element of an advert that interests you. Television adverts and radio generally have jingles. A short song or musical saying that is supposed to stay in your head. Music can create a pace and rhythm. ...read more.

Nearer the end it becomes very dramatic: a type of symphony which alters with the speed of the cars and as it disappears through the tunnel. As you see the old-fashioned racing Jaguars the music changes and includes the introductory bars of the modern day grand prix. The music is very influencing to make you believing the speed, smoothness, power, and sheer luxury of the cars. What intrigued me about this advert was there were no characters used; during the editing between the cars we have no view of the drivers. It is only when it gets to the race track that we see someone. In the black and white clip that takes you back in time, we see the back of someone's head, and at the very end we see two men walking away from their cars. There is no celebrity endorsement or particular ethnic group used, I think this is showing anyone who wants a fast, powerful, yet smooth luxury car doesn't have to be a 'David Beckham' or a specific race, but a man wanting a bit of class in his life. In the magazine there is relatively little text used it has been left quite simple but I think this does nothing but increase the productivity of the advert. The text emphasises the girly girl factor, with the use of pink lettering, the words 'touch of pink' are in bold; however the lettering is lower case which gives the look of cuteness and innocence which may be the look some women are trying for. ...read more.

words out of the Advert Anagram 'SIMPLE' As you do need to engage your audience, and get them hooked, without an impacting hook you need not bother advertising! When I first watched the advert I didn't really take much notice. It is only as I have an interest in cars and specifically Jaguars that I looked. Maybe because I don't drive, I didn't hook straight away, but I found it quite boring and non-descript. There was definitely nothing catchy to my eye, if I were a wealthy business man looking for a new classy car I don't think there was enough in the advert to make an impact on me. Perhaps if they were to change it, add a better hook possibly even a rev of an engine would engage viewers as the sound would definitely be a head turner, or even a well-known theme tune. Advertising is extremely important for every company as without advertising people cannot see, hear, or read about new products and will obviously not buy. Advertising is also important in the 21st century because; 1. There is so much competition between brands, 2. Companies want to make more money and advertising is a way to gain new customers. 3. If companies do not attract customers to buy their products they will not sell and be able to make a profit. 4. No profit, no new products as everything costs money to make , to advertise to sell. It is really a vicious circle! ?? ?? ?? ?? Adam Patterson 10XR ...read more.