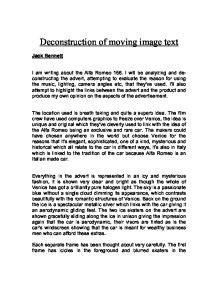 Deconstruction of moving image text Jack Bennett I am writing about the Alfa Romeo 156. I will be analyzing and de-constructing the advert, attempting to evaluate the reason for using the music, lighting, camera angles etc, that they've used. I'll also attempt to highlight the links between the advert and the product and produce my own opinion on the aspects of the advertisement. The location used is breath taking and quite a superb idea. The film crew have used computers graphics to freeze over Venice, the idea is unique and original which they've cleverly used to link with the idea of the Alfa Romeo being an exclusive and rare car. ...read more.

The two ice skaters on the advert are shown gracefully sliding along the ice in unison giving the impression again that the car is aerodynamic, their visors are tinted as is the car's windscreen showing that the car is meant for wealthy business men who can afford these extras. Each separate frame has been thought about very carefully. The first frame has icicles in the foreground and blurred skaters in the background setting up anticipation and curiosity, where is this? What's it at about? The technique of not showing the product until the end is a common one, it is used to keep the viewers attention all the way through. ...read more.

One of the last frames is of the Alfa Romeo badge, they've done this to leave the picture stuck in the viewers mind. Sound effects are used to their full potential in this advert, there are lots swooshing types of noises as the car races past the camera, they use this to make the car seem as though as its going exceptionally fast. There are also crunching noises as the car grinds the ice to little bits when it flies along the ice, this is used to give the impression that if the car can go that fast and have that amount of control over the icy surface then it can go absolutely anywhere with twice as much grip, this also shows that it has exceptional handling. ...read more.