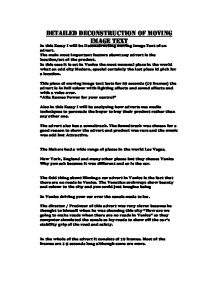 Detailed Deconstruction of Moving Image Text In this Essay I will be Deconstructing moving Image Text of an advert. The main most important feature about any advert is the location/set of the product. In this case it is set in Venice the most unusual place in the world what an odd city Modern, special certainly the last place id pick for a location. This piece of moving image text lasts for 29 seconds (19 frames) the advert is in full colour with lighting effects and sound effects and with a voice over. "Alfa Romeo Power for your control" Also in this Essay I will be analysing how adverts use media techniques to persuade the buyer to buy their product rather than any other one. The advert also has a soundtrack. The Soundtrack was chosen for a good reason to show the advert and product was rare and the music was odd but Attractive. The Makers had a wide range of places in the world Las Vegas, New York, England and many other places but they choose Venice Why you ask because it was different and so is the car. ...read more.

Trying to appeal to both the family man or boy racers. This time the camera slides into the inside of the car beautiful, modern wooden fascia the wooden steering wheel come from when the car company made sports cars and it was the fashion to have wooden shiny steering wheels. All the next 5 frames show control grip on the icy roads the car is showing safety and so that would appeal to families. The camera then shows the people driving the car the women is aged between 30-40yrs old wearing a collar neck jumper and a blue jacket. And the man is also aged 30-40yrs and wearing a black jacket with jeans. The woman is dressed for winter and is not cold and has a smile on her face so it must be comfortable and warm otherwise she would be frowning. The camera then goes through some Venetian archways and you see a perfect picture of the car and the camera follows the car though the Venetian archways. The badge the main feature shining blues, reds and greens of the badge and the colour of the car go well. ...read more.

Male voices over deep, loud, clear voice. A voice you will remember, in English terms it is called "Received Pronunciation" Indian music for the soundtrack calm cool relaxing music, special music just for this car advert. Because the car is special so can the music. It's about a medium pace with percussion. Sort of an out of this world, sort of music. In frames 2 & 4 there are roars of the cars engine representing power and agility. And the noise of the tyres when it is cornering. My Conclusion is that the advert was successful in selling their car and that the car looked powerful, but safe at the same time. I liked especially the iced over canals of Venice because I have actually been there and was quite funny to see it iced over. I didn't have anything I disliked. The things I would change is at the end or during the advert it would be good to have some details about the car e.g. price I hate adverts that don't say the price of the car I mean it could be really expensive but I know they are just doing that so that buyers do not get put off by the price. ...read more.