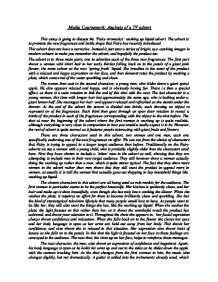 Media Coursework: Analysis of a TV advert This essay is going to discuss the 'Fairy Aromatics' washing up liquid advert. The advert is to promote the new fragrances and bottle shape that Fairy has recently introduced. This advert does not have a narrative. Instead it just uses a series of bright, eye-catching images in modern colours to make you remember the advert, and hopefully the product too. The advert is in three main parts, one to advertise each of the three new fragrances. The first part shows a woman with short hair in her early thirties falling back on to the petals of a giant pink flower, the same colour as the new 'spring fresh' liquid. She breathes in the scent of the product with a relaxed and happy expression on her face, and then demonstrates the product by washing a plate, which comes out of the water sparkling and clean. The screen then cuts to the second character, a young man, who slides down a giant spiral apple. He also appears relaxed and happy, and is obviously having fun. There is then a special effect, as there is a cube rotation to link the end of this shot with the next. The last character is a young woman, this time with longer hair but approximately the same age, who is bathing under a giant lemon half. She massages her hair and appears relaxed and refreshed as she stands under the shower. ...read more.

A guitar is added into the instruments already used, which gives it a slightly more masculine sound to the melody. It also adds a more fresh sound to the music as the focus changes from the floral fragrance to the apple one. It is subtle but helps the scenes flow smoothly from one to another. To make the next transition smooth, a cube rotation is used to link to the next scene of the woman bathing under the lemon half. The camera starts focused on the lemon, but then tilts down to a medium shot of the woman's face. She appears relaxed and refreshed as she massages her hair under the shower, and the light focuses on her face. The camera then cuts to a shot looking up at her from below. This makes her seem like a role model, as she appears higher up than the audience and you are looking up to her example and how relaxed and happy she looks from buying this product. All three of the characters appear happy to be associated with the washing up liquid. The bright, modern colours used in the advert, with the young characters make the advert appealing to the younger audience. The advert attempts to make washing up seem 'cool' at a time when there is so much competition with dishwashers. You do not immediately realise that this is an advert for washing up liquid, as first impressions suggest that it is for some kind of toiletry. ...read more.

This advert has clearly been aimed at a different target audience to the old Fairy adverts that preceded it. This advert is aimed more at younger people that may be single rather than part of a family, as all the characters we see are alone, rather than in the old adverts where we typically saw a woman with a young child. Also the characters we see are much younger than before, so they represent the generation Fairy are trying to appeal to more. This advert is also being aimed more at men now as well as women, as we now see a man featured when previously there has not been. The advert is trying to target quite a wide range of people, so it would most probably be shown on prime time television in the evenings, in the breaks of soap operas at dinnertime when a lot of people will be watching. It would also probably be shown later on between about eight and nine o' clock when there are quite a lot of TV dramas and other popular programmes with large audiences. This would help make sure as many people in the target audience as possible see the advert. It would be unlikely to be shown in the early afternoon, between about three and four o' clock when the children's programmes are on, as not many people interested in the product would be watching. Also a lot of people in the target audience would still be at work at this time so it would not be worth showing it then. ...read more.