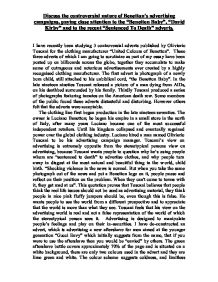 Discuss the controversial nature of Benetton's advertising campaigns, paying close attention to the &quot;Benetton Baby&quot;, &quot;David Kirby&quot; and to the recent &quot;Sentenced To Death&quot; adverts.

Discuss the controversial nature of Benetton's advertising campaigns, paying close attention to the "Benetton Baby", "David Kirby" and to the recent "Sentenced To Death" adverts. I have recently been studying 3 controversial adverts published by Olivierio Toscani for the clothing manufacturer "United Colours of Benetton". These three adverts of which I am going to scrutinize as part of my essay have been posted up on billboards across the globe, together they accumulate to make some of outrageous and notorious advertisements ever created by a highly recognised clothing manufacturer. The first advert is photograph of a newly born child, still attached to his unbiblical cord, "the Benetton Baby". In the late nineteen nineties Toscani released a picture of a man dying from AIDs, on his deathbed surrounded by his family. Thirdly Toscani produced a series of photographs featuring inmates on the American death row. Some members of the public found these adverts distasteful and disturbing. However others felt that the adverts were acceptable. The clothing line first began production in the late nineteen seventies. The owner is Luciano Benetton; he began his empire in a small store in the north of Italy, after many years Luciano became one of the most successful independent retailers. Until his kingdom collapsed and eventually regained power over the global clothing industry. ...read more.

This enhances the quality by emphasising the background to make the child stand out. This advert could cause people great distress particularly couples who are infertile or have been bereaved of one of more of their children. When the advert was primarily published in nineteen ninty one the Advertising Standards Authority (ASA) received over eight hundred complaints about the advert which had been described as "widespread controversy" however considering that the advert had been posted up on bill boards globally and that millions upon millions of people must have seen this image, I would not consider this to be widespread. The term "controversial" means to "create widespread or global argument". The ASA are a governing body that responds to the publics concern about offensive material. The agency has been in operation for over four decades. The "Benetton Baby" advert had received the most complaints to the ASA in the forty-two year history of the monitoring and approval organisations. The second controversial that took the world by storm was the "David Kirby" advert a man aged forty- five on his deathbed dying from AIDS. The man has his entire family surrounding him; the man covers approximately 50% of the image. The family is crying or have deeply sad expressions on their faces. ...read more.

This suggests that they are challenging us, and nine time out of ten we stop and think about these questions. I think that Benettons adverts are acceptable as photographs but as adverts they are totally unacceptable, because they have nothing to do with advertising clothes. I think that Benetton has done this for publicity possibly to advertise the company although that would not make people want to go to his stores, or simply to promote these epidemics these natural occurrences and these dreadful things that people are doing. The adverts are partially exploitive but not at all gimmicky. I think that these adverts are designed to make us think about what we are doing to ourselves and how we could end humanity. I prefer the "Benetton Baby" to the "David Kirby" but the "Sentenced To Death" to the David Kirby" I think that all of the adverts are controversial in their own different ways for example "Benetton Baby" could offend infertile couples. The "David Kirby" could offend people with AIDS, and "sentenced To Death" could offend people with family on death row. So I can't say that ones more controversial than another, but what I can say is there all controversial in their own different way. 1,692 words. 4 pages. 14 paragraphs. 171 lines. ...read more.