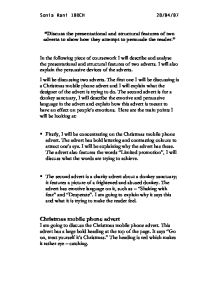 "Discuss the presentational and structural features of two adverts to show how they attempt to persuade the reader." In the following piece of coursework I will describe and analyse the presentational and structural features of two adverts. I will also explain the persuasive devices of the adverts. I will be discussing two adverts. The first one I will be discussing is a Christmas mobile phone advert and I will explain what the designer of the advert is trying to do. The second advert is for a donkey sanctuary, I will describe the emotive and persuasive language in the advert and explain how this advert is meant to have an effect on people's emotions. Here are the main points I will be looking at: * Firstly, I will be concentrating on the Christmas mobile phone advert. The advert has bold lettering and contrasting colours to attract one's eye. I will be explaining why the advert has these. The advert also features the words "Limited promotion", I will discuss what the words are trying to achieve. * The second advert is a charity advert about a donkey sanctuary; it features a picture of a frightened and abused donkey. ...read more.

Below that there is other company's tariffs in a box. The advertisers compare their tariff to other company's tariffs to show that their's is much cheaper than other company's. Next to that box the advertisers are advertising another one of their mobile phones, in bold lettering it says "Also available". I noticed that the advertisers used larger font for the word "Free", again this is persuasive language and is trying to make the reader think that it's a great offer. Lastly, at the bottom of the advert in large, bold lettering the text says, "Call now for next day delivery", this incredibly great service is meant to make the reader want to order the product right away. Underneath the phone number, there are the terms and conditions in small print. There are probably some cons that's why the advertisers used such a small font. Overall, I think this advert was well presented and quite persuasive. Donkey sanctuary advert This is a charity advert advertising a donkey sanctuary, the advert contains a large amount of emotive language to make the reader feel sympathetic towards the advert and want to do something to help. At the top of the page the bold heading reads "Saved from SLAUGHTER". ...read more.

The advertisers have also printed the name of the person you should talk to if you have any questions. I think this advert is very practical and very emotive. It would certainly catch my eye. Both of the advertisements are well presented and had a good structure. They are both eye-catching and I think they would get the publics attention. If I was to choose between the two adverts I would choose the donkey sanctuary advert because it is very emotive and is more likely to grab my attention because of the ill-treated donkey image. The Christmas mobile phone advert is also eye-catching but it's just another mobile phone advert and has nothing unique about it. The two adverts are both trying to seek the readers' attention because they are both promoting something. Both of the adverts have large bold headings. I think the Christmas mobile phone advert would be more successful than the donkey sanctuary advert because people are always attracted by special offers and most people, not all people but most people would just ignore the donkey sanctuary advert because after all, it's not going to benefit them. I have now finished explaining the presentational, structural and persuasive features of the adverts. ?? ?? ?? ?? Sonia Rani 10DCH 28/04/07 ...read more.