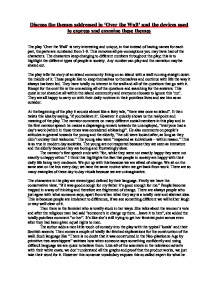 Discuss the themes addressed in 'Over the Wall' and the devices used to express and examine these themes The play 'Over the Wall' is very interesting and unique, in that instead of having names for each part, the parts are numbered from 1-9. This removes all pre-conceptions you may have had of the characters. The characters keep changing to different numbers throughout the play; this is to highlight the different types of people in society. Any number can play and the narration may be shared out. The play tells the story of an island community living on an island with a wall running straight down the middle of it. These people like to keep themselves to themselves and continue with life the way it always has been led. They have totally no interest in the wall and all of the questions that go with it. Except for the one! He is the one asking all of the questions and searching for the answers. This quest is not shared at all within the island community and everyone chooses to ignore this 'nut'. They are all happy to carry on with their daily routines in their pointless lives and see him as an outsider. ...read more.

She talks about the women's vote and after the religious man had said "someone's in charge up there...leave it to him", she added the totally pointless comment "or her". It's like she's still trying to get her feminist point across even after they had been given equal rights to men. The author adds a nice little touch of comedy into the play with the typical 'locals' and their Scottish accents. Then comes a couple of totally far-fetched explanations for the construction of the wall. Such language like "There is no doubt that it was constructed in the Neo-plasticene Age by primitive tree-worshippers" satirises how when someone says something confidently and using difficult language we are quick to believe them. Like all of the scientists in the television adverts with their white coats, we don't understand all the graphs and proof that the product works, we just take their word for it. However this nonsense vocabulary exposes this so called expert for what he really is. It is strange after this as there is a totally logical explanation but it is immediately dismissed because of the extra 'enom' added to phenomenom. This was totally unnecessary and the mispronunciation highlights his ignorance. ...read more.

In the next scene the explorer character that desperately wants to know what is over the wall goes to see the doctor. He tries to explain that he wants to talk about his obsession with the wall but the doctor is too wrapped up in asking his routine doctor's questions like "sleeping all right? Eating all right?" He cannot understand that the patient's problem is not a physical one but a psychological one. It satirises how the doctors gives out the same old questions to all of their patients and don't let the actual patients get a word in edge-ways. It shows how the doctors don't care about what they are doing they just say what they have to say and give out a prescription. The final scene is the launching of the explorer over the wall. As he goes up and can see over he suffers a heart attack... The locals "shook their heads or giggled, and went back to their beans, and their goldfish." This is a complete anti-climax and shows how the locals just wanted him gone and they didn't even feel bad that he had died, they just went back to their routines. His death symbolises how the wall was out of his understanding, like God and his mind could not comprehend what was on the other side. ...read more.