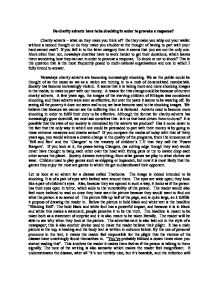 Do charity adverts have to be shocking in order to provoke a response?

Do charity adverts have to be shocking in order to provoke a response? Charity adverts - what do they make you think of? Do they make you whip out your wallet without a second thought or do they make you shudder at the thought of having to part with your hard-earned cash? If you fall in to the latter category then it seems that you are not the only one. More often than not, nowadays charities have to work harder to get their donations, which leaves them wondering how they can act in order to provoke a response. To shock or not to shock? This is the question that is the most frequently posed to multi-national organisations and one in which I fully intend to answer. Nowadays charity adverts are becoming increasingly shocking. We as the public could be thought of as the cause as we as a nation are turning in to a mob of de-sensitized neandathals. Society has become increasingly violent. It seems that it is taking more and more shocking images in the media, to make us part with our money. A reason for this change could be because of current charity adverts. A few years ago, the images of the starving children of Ethiopia was considered shocking, and these adverts were seen as effective, but over the years it seems to be wearing off. By seeing all the poverty it does not seem real to us; we have become used to the shocking images. ...read more.

It underestimates the disease, after all "it's not terribly nice, but it's bearable, and the infection will soon burn itself out". The text is in small print, but every so often there are words, which are in bold or boxed to emphasize their meaning. Such an example of this is when they say "Imagine, everytime you blink you scratch your eyes. This tries to make the reader know how it feels to have this disease. It also works in conjunction with the picture of the eyes entwined with the sharp barbed wire. In the text, there are also some words used a lot in order to get the message across, words such as 'burn', and 'agonizing'. All these words are used in this contrast. The tone of the writing changes throughout the piece from going from sarcastic to writing with compassion. It is not only the images used that can be shocking; in some adverts it is what the image can convey. An example of this is in the Marie Stopes Abortion advert. There is a lot of text, which seems to be just a lot of information, so the reader does not bother to read it straight away. There is also one main picture of a coat hanger that has been untangled, which seems to be irrelevant. The reader would probably dismiss this advert, but then they read the headline, which say's "When abortion isn't an option, some Women have stab at it anyway". ...read more.

Advertisers should know when to stop. Adverts for charities should be dramatic, but the images and style in which an advert is packaged should also be easy to take in. In my view I think that adverts have to be shocking in order to provoke a response. It has come to a point where it is necessary to portray the advert in a shocking way in order for it to be acknowledged. This does not mean however that I applaud charity adverts such as the RSPCA advert, because I believe those adverts to be both wrong and hypocritical. How can an organization that is supposed to promote animal welfare be so far off the mark? However it is important to maintain a balance between shocking and non-shocking adverts. It is because of the excessive use of shocking adverts that we have become immune to them. The advert should be easy to take in, but it should also linger in the mind and have a good impact in order for it to be successful. The abortion advert is a good example of this: it is both shocking and effective, but it has a sort of safety lock on it to ensure the wrong people do not see it. Anyway, if you still believe that non-shocking adverts are most effective, and if you are still unsure about the place of violence in our society just look on the Internet. I mean, where else but on an animal welfare website would you find games such as electrocute the puppy and win $20? ?? ?? ?? ?? ...read more.