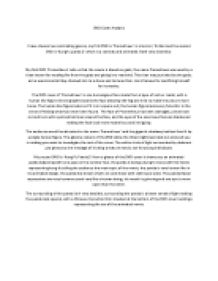 ﻿DVD Cover Analysis I have chosen two contrasting genres, my first DVD is ?Prometheus? is a horror / thriller and the second DVD is ?Kung fu panda 2? which is a comedy and animated. Both very dissimilar. My first DVD ?Prometheus? tells us that the movie is based on gods, the name Prometheus was used by a titan known for stealing fire from the gods and giving it to mankind. This titan was punished by the gods, as he was immortal they chained him to a stone and tortured him. ...read more.

The face of Prometheus has been damaged, pieces look cut and torn with symmetrical lines around the face, and the eyes of the enormous face are blackened making the face look more mysterious and intriguing. The audience would be attracted to the name ?Prometheus? and the gigantic shadowy hairless face lit by a single human figure. The gloomy colours of the DVD allow the titles brightness blast out and pull you in making you want to investigate the rest of the cover. ...read more.

main topic of the movie, the panda is very human like in its animated design, the panda has brown shorts on and shoes with cloth type socks. The pandas facial expressions are very humorous and very like a human being, his mouth is grinning and one eye is more open than the other. The surrounding of the panda isn?t very detailed, surrounding the panda is a beam streak of light making the panda look special, with a Chinese city behind him situated at the bottom of the DVD cover buildings representing the era of the animated movie. ...read more.