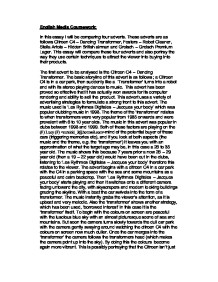 English Media Coursework: In this essay I will be comparing four adverts. These adverts are as follows Citroen C4 - Dancing Transformer, Fosters - Robot Cleaner, Stella Artois - Hidden British airman and Grolsch - Grolsch Premium Lager. This essay will compare these four adverts and also portray the way they use certain techniques to attract the viewer into buying into their products. The first advert to be analysed is the Citroen C4 - Dancing Transformer. The basic storyline of this advert is as follows; a Citroen C4 is in a car park, then suddenly like a 'Transformer' turns into a robot and with its stereo playing dances to music. This advert has been proved so effective that it has actually won awards for its computer rendering and ability to sell the product. This advert uses a variety of advertising strategies to formulate a strong front to this advert. The music used is 'Les Rythmes Digitales - Jacques your body' which was popular clubbing music in 1998. The theme of the 'transformer' relates to when transformers were very popular from 1985 onwards and were prevalent with 6 to 10 year olds. The music in this advert was popular in clubs between 1998 and 1999. ...read more.

At this point music gently starts to play, gradually getting louder and louder. A common strategy to use in adverts is s*x, but it probably isn't counted as a strategy in this, due to most humans not being attracted to vacuums or robots. The robot calmly and coolly lifts up a can of fosters and pours some down a hatch in its chest. Then 2 pieces of writing appear on the screen "Drink Australian, Think Australian" in type of writing you would find on the front of a Chinese restaurant, but said in an Australian accent by a voice-over. As the man stands looking mortified at his robot, with very exaggerated actions throughout the advert, a 'ping' is heard from underneath the bed sheets. The man snatches up the bed sheets and to his disgusts sees a microwave in-between the robots legs. The advert ends with the Japanese man making an 'Urgh!' sound. This is very good use of comedy. In this advert there is two main contrasts, the robot who drink Australian beer, and acts in a very laid back type of manor. And then the stereotypical fast paced life of a Japanese businessman. ...read more.

Then the Dutch man slowly opens a bottle of Grolsch while the sound of him opening the bottle is enhanced. This is very effective in the Dutch man look refreshed and giving you the impression that it will have the same effect on you. This sequence is shortly preceded by the aliens dropping the trucker back into the river in a barrel type device with an also 'louder than life' splash, which has obviously been enhanced. The scene roles on to the aliens coming in their spaceship to a large storage park full of containers of Grolsch Lagers. The colour pretty much everywhere is green to relate to the fact that everything about Grolsch is green. This is a dominant feature, which is portrayed throughout the advert (the green). Once the spaceship has entered the atmosphere the aliens sit down and relax (again promoting the fact of relaxation and refreshment) while drinking Grolsch. This is where the main humorous part comes into play. One of the aliens (also green) while sitting down drinking Grolsch, points at his fellow aliens chest. Then when his fellow alien looks down the alien flicks him in the nose. This was a very effective piece of advertising due to school children actually mimicking this, so every time someone does that it reminds people of Grolsch. ...read more.