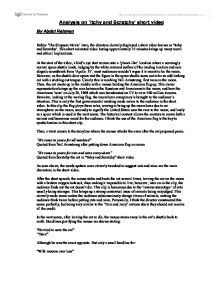 Analysis on 'Itchy and Scratchy' short video By Abdul Rehman Before 'The Simpson Movie' intro, the directors cleverly displayed a short video known as 'Itchy and Scratchy'. This short animated video lasting approximately 15 minutes brings up many moral and ethical implications. At the start of the video, a bird's eye shot zooms onto a 'planet-like' location where a seemingly normal space shuttle lands. Judging by the white cratered surface of the landing location and non-diagetic soundtrack from 'Apollo 13', most audiences wouldn't argue it is meant to be the moon. However, as the shuttle door opens and the figure in the space shuttle turns out to be an odd looking cat with a sticking out tongue. Clearly this is mocking Neil Armstrong, first man on the moon. Then, the cat meets up in the middle with a mouse holding the American flag up. This clever representation brings up the race between the Russians and Americans to the moon, and how the Americans 'won' on July 20, 1969 which was broadcasted on TV to over 500 million viewers. However, looking at the waving flag, the moon hoax conspiracy is brought to the audience's attention. This is only the first governmental masking made aware to the audience in the short video. In this clip the flag plays three roles, waving to bring up the moon hoax due to no atmosphere on the moon, secondly to signify the United States won the race to the moon, and lastly as a spear which is used in the next scene. ...read more.

In my view, the patriotic tune and mice parades are vital to this scene to show the sudden change of position for Itchy, but the scene is too fast for some of the audience to take in. Eventually, Itchy becomes president and a medium long-shot zooms slowly onto the white house. Then a medium shot is shown of Itchy in his presidential room. The mise-en-scene in his office is very important. It shows he has more than enough boxes of rich cheese, which is laid out on his desk and chairs, while others out there voted a lot for him and get nothing in return. This stereotype states that presidents are lazy, greedy, corrupt, power consuming and do nothing but sit down in there office all day. If you also look closely the small framed pictures on both left and right in the scene are supposed to be Abraham Lincoln and George Jefferson, but the pictures are of mice, implying that all previous elections were of mice, and America's famous history was lead by mice. This also states that since the previous presidents were mice, they were all corrupt like Itchy. This makes the audience think more of Hillary Clinton since she was different from them. The audience is given both humour and understanding of the scene, however subconsciously the audience is told to vote for Hillary Clinton. ...read more.

Then when selecting '3.Accidental Launch', Itchy covers his eyes in guilt and presses the launch button. Immediately masses of missiles are launched at Scratchy. This shows that America has too many nuclear missiles, and makes the audience of 'power hungry' America. Too add humour to the scene, Scratchy swallows all the missiles but a last missile opens up and a metal leg comes out and kicks his stomach. A huge explosion takes place, which surrounds the moon and sends a shockwave around space. This shows also how dangerously active a nuclear missile is, it responds to a kick. Also the hatch of the missile coming off symbolises the devastating event in Russia, where the top of a missile blew off and killed those inhabitants of Chernobyl. As this scene finishes, Homer Simpson stands up and an extreme close up of his upper body is taken. People mumble for him to sit down, and Lisa tells him to sit down, however he points at the camera and shouts out 'all the people who are watching this movie are suckers especially you'. This connects with the audience cleverly by approaching every person in the audience separately, stating they wasted there money and including some final humour for the viewer. The director uses humour in that way to incorporate other messages into the film. This is the overall context and meaning to the short video 'Itchy and Scratchy', deeply analysed. But was this all humour, or was some of it, in fact, true? ...read more.