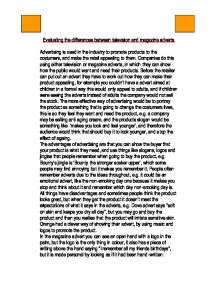 Evaluating the differences between television and magazine adverts

Evaluating the differences between television and magazine adverts Advertising is used in the industry to promote products to the costumers, and make the retail appealing to them. Companies do this using either television or magazine adverts, in which they can show how the public would want and need their products. Before the retailer can put out an advert they have to work out how they can make their product appealing, for example you couldn't have a advert aimed at children in a formal way this would only appeal to adults, and if children were seeing the adverts instead of adults the company would not sell the stock. The more effective way of advertising would be to portray the product as something that is going to change the costumers lives, this is so they feel they want and need the product, e.g. a company may be selling anti aging cream, and the products slogan would be something like 'makes you look and feel younger', and therefore the audience would think that should buy it to look younger, and stop the effect of ageing. ...read more.

The palm if facing upwards and the fingers are slightly clenched, but not so much that you can't see the logo. You can also see that there is a bracelet on the arm of the person, this could be to symbolise friendship as the phrase above says, "I remember all my friends birthdays". This advert is probably aimed at older teens to adults because of the layout language and colour used. Also because older people are more likely to use a mobile phone than a young child is. It was found in a newspaper which also shows us what audience its aimed at by who would read the paper, which in the case adults and possibly older teens. Right at the bottom there is small print, and the Orange logo and website. In this text Orange are showing that they are not trying to sell a phone, but they are trying to sell their network, The actual words used are, "What's more this service is available to anyone in the United Kingdom with a mobile phone, whatever network you're with", This quote seems to be reassuring the costumer that anyone can be apart of orange, and you are able to keep your change network without having to buy a new mobile phone. ...read more.

The advert appeals to all people, and although the images are similar, each is saying something different. This is what appeals to different audiences. There is an image of a young child's hand, and even though the child would not have a mobile, it is another way of showing Orange network available to everyone. The television advert is as plain and boring as the magazine advert, but it the television advert is more appealing, and likely to persuade more people to purchase the network. Both of the adverts have qualities but the television advert is likelier to appeal to more people, as it has many different images rather than just the one. Yet the layout of the magazine advert is set out well because of the order you see things: 1. The writing "I remember my friends birthdays" 2. The hand with the Orange logo, and friendship bracelet. 3. Text on where to find more information about the product. 4. The website which is one of two things in colour on the page. If I was to buy this product the television advert would appeal to me most, simply because it gives more information and appeals to more people. ...read more.