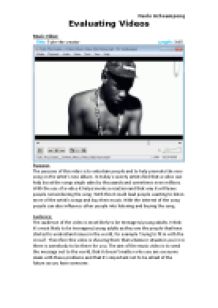 ﻿Paolo Acheampong Evaluating Videos Music Video: Title: Tyler the creator Length: 3:05 Purpose: The purpose of this video is to entertain people and to help promote the new song on the artist?s new album. In today?s society artists find that a video can help boost the songs single sales by thousands and sometimes even millions. With the use of a video it helps invoke a reaction and that way it will leave people remembering the song. With this it could lead people wanting to listen more of the artist?s songs and buy their music. With the interest of the song people can also influence other people into listening and buying the song. Audience: The audience of the video is most likely to be teenagers/young adults. I think it?s most likely to be teenagers/young adults as they are the people that have started to understand issues in the world, for example ?trying to fit in with the crowd?. ...read more.

The video itself is very eye opening because of the high definition cameras. This music video contains effects. Even though these effects are unrealistic they do make the video more interesting and therefore the audience will be entertained. One of the effects used is when Tyler the creator s pupils gets big. Bad: The bad feature about the video is that the there is not are lot of changing background is just at the end which tylor the creator hangs himself and the screen gets dark with a small wood chair on the floor at the end of the clip. Improvements At 0:55 on the video, the scene is quiet unrealistic to what would really happen in real life. In the scene I think Tyler the creator should had a handkerchief because when it vomited it was kind of nasty and he clean it with his hand . ...read more.

Another good feature is that they have a variety of camera angles: close up shots, side shots and mid shots. These shots make the advert itself look better. If the advert kept one camera angle then the advert would be very dull and boring. Bad: A bad thing about this advert is that the gorilla is very irrelevant to the product. A gorilla has nothing to do with chocolate and as this advert uses a gorilla to sell advert the point of using the gorilla is unknown. The gorilla itself just plays the drums in the advert. It does not however sell the product to the audience at all. Improvements: To improve this advert it would be a good idea if they could try and involve the chocolate bar more in the advert. The chocolate bar is only shown at the end for about 3 seconds. So throughout the 1 minute and a half video the chocolate bar is shown once for 3 seconds. The other seconds the video just shows the gorilla playing the drums, which has nothing to do with the ...read more.