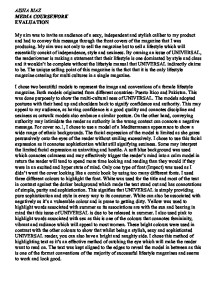 Evaluation of marketing for a new magazine.

AISHA RIAZ MEDIA COURSEWORK EVALUATION My aim was to invite an audience of a sexy, independent and stylish caliber to my product and had to convey this message through the front covers of the magazine that I was producing. My aim was not only to sell the magazine but to sell a lifestyle which will essentially consist of independence, style and sexiness. By owning an issue of UNIVERSAL, the reader/owner is making a statement that their lifestyle is one dominated by style and class and it wouldn't be complete without the lifestyle manual that UNIVERSAL indirectly claims to be. The unique selling point of this magazine is the fact that it is the only lifestyle magazine catering for multi cultures in a single magazine. I chose two beautiful models to represent the image and conventions of a female lifestyle magazine. Both models originated from different countries- Puerto Rico and Pakistan. This was done purposely to show the multi-cultural ness of UNIVERSAL. The models adopted postures with their head up and shoulders back to signify confidence and authority. This may appeal to my audience, as having confidence is a good quality and connotes discipline and sexiness as catwalk models also embrace a similar posture. On the other hand, conveying authority may intimidate the reader as authority in the wrong context can connote a negative message. For cover no.1, I chose to use a model of a Mediterranean appearance to show a wide range of ethnic backgrounds. ...read more.

This type of facial expression is probably used more in fashion shoots rather than front cover shots and maybe I should have used another shot of the model where she was addressing the audience so the audience felt more of a connection with the magazine. The image of the model looks a bit too large and maybe would've looked better if reduced a little to expose more of the model's traditional clothes and more of her shoulders. She's also wearing a lot of make-up which makes her appear more artificial, this is the sort of look and image that I didn't want as I mentioned for front cover no.1 as the reader will be more reluctant to try as she looks a bit false. On the other hand, an optimistic UNIVERSAL reader may see this as a new trend and may try this look for a change. The aim of the BaByliss Half Time adverts was to attract an audience that enjoys and values looking after their appearance and enjoys a lifestyle that consists of time efficiency, minimalism and glamour which the adverts will represent and convey through organised and carefully thought out presentation. I decide to call this product Half Time in order to promote its speed as it takes half the time normal styling products take. This is also the USP as the target audience will be working females with a busy lifestyle who would benefit from this product as it will save them time to do other important things. ...read more.

to highlight the word 'contents'. The whole idea of this contents page was to invite the audience and make them want to read the whole magazine therefore I included interesting topics such as arranged marriages and made it one of the main focus of the contents page. This also showed that UNIVERSAL has a serious side as well as the sexy and stylish one. More pictures were used on this page to keep the reader interested as too much writing might bore them. I used a layout consisting of three columns and a panel and this made the appearance neater. I chose to place a green and white panel containing UNIVERSAL offers. By putting these offers in a panel I'm highlighting the offers and making them more eye-catching so the reader doesn't overlook them. I think my layout organisation could have been better as some of the columns appear smaller than other. I think by using three different typefaces, the contents page appeared less professional. I didn't organise the topics into groups i.e. Health, beauty, fashion etc. This mixed all the topics up and made it harder for someone looking for certain topics to find them. The end product looked more plain and boring than I wanted and expected and there wasn't anything that said "READ ME!!" This is probably because I left it too late to do a lot more research on making my contents page have its own distinct appearance at the same time making it interesting. ...read more.