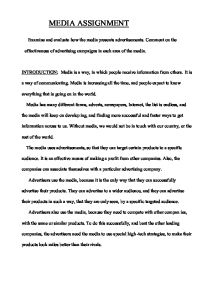 Examine and evaluate how the media presents advertisements. Comment on the effectiveness of advertising campaigns in each area of the media.

MEDIA ASSIGNMENT Examine and evaluate how the media presents advertisements. Comment on the effectiveness of advertising campaigns in each area of the media. INTRODUCTION: Media is a way, in which people receive information from others. It is a way of communicating. Media is increasing all the time, and people expect to know everything that is going on in the world. Media has many different forms, adverts, newspapers, Internet, the list is endless, and the media will keep on developing, and finding more successful and faster ways to get information across to us. Without media, we would not be in touch with our country, or the rest of the world. The media uses advertisements, so that they can target certain products to a specific audience. It is an effective means of making a profit from other companies. Also, the companies can associate themselves with a particular advertising company. Advertisers use the media, because it is the only way that they can successfully advertise their products. They can advertise to a wider audience, and they can advertise their products in such a way, that they are only seen, by a specific targeted audience. Advertisers also use the media, because they need to compete with other companies, with the same or similar products. ...read more.

Also, Douglas is made out of the butter, so he ties in with the rest of the advert. The Lurpack advert uses more camera shots than the Oral B advert. Also the Lurpack advert uses more lighting techniques, as it is much lighter than the Oral B advert. They are both effective adverts though, as both make their products look superior two other similar products. Also both adverts use digital effects to achieve the adverts. MAGAZINES Companies pay huge sums of money to get their products advertised. Some of this money goes towards magazine advertisements. The techniques used in magazine advertisements, are quite different from the techniques used for television advertisements. For example, a magazine advert does not have the advantage of movement, or camera effects. So instead, they have to concentrate really hard to gain our attention. They do this by using propaganda, persuasive language, photographic techniques and images and colour. They also use alliteration, rhymes and slogans. Magazine advertisements have the advantage of being able to use nasal sensory. So, they can give a sample of a new perfume or shampoo etc. They can also be more specific and detailed using more images and information, because the reader of the magazine advertisement can spend as long as they like looking at it. ...read more.

This is because they have the capacity, to reach millions of prospective customers in an instant. CONCLUSION Advertising plays a crucial role, in the profits and developments, of income for companies. Advertising comes into play, when there are different companies, all trying to sell the same types of products. It is obvious that advertising is successful. For example, Rimmel makeup is seen as more glamorous and trendy than boots makeup. This is because Rimmel products are always being advertised, and so they are more widely known and accepted. Advertisers are very clever, in the way that they target people's insecurities and desires. It is hard nowadays, to escape all the advertising in modern society. As a result of my examination of two types of media advertising, I have defiantly come to the conclusion that advertising is a very successful business. Although sometimes, I do think that the media can be over used. The advertisement of new toys for children, etc, can cause conflict. This is because the parents are always being pressurised, into getting the latest fashions for there children. It can also put pressure on teenagers, because we have to try and keep up with the latest trends and advertised products. Advertisements are very powerful, and can strongly influence or actions, without us even being aware of it. New, and even more effective techniques of persuasion, are being developed all the time. BY VICTORIA BRANSTON ...read more.