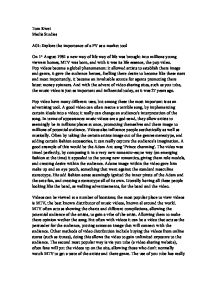 Explain the importance of a pop video as a marketing tool

Tom Kwei Media Studies A01: Explore the importance of a PV as a market tool On 1st August 1981 a new way of life way of life was brought into millions young viewers homes, MTV was born, and with it was its life essence, the pop video. Pop videos became a global phenomenon: it allowed artists to establish there image and genre, it gave the audience heroes, fuelling there desire to become like these stars and most importantly, it became an invaluable source for agents promoting there latest money spinners. And with the advent of video sharing sites, such as you tube, the music video is just as important and influential today, as it was 27 years ago. Pop video have many different uses, but among these the most important is as an advertising tool. A good video can often rescue a terrible song, by implementing certain ideals into a video; it really can change an audience's interpretation of the song. In terms of appearances music videos are a god-send, they allow artists to seemingly be in millions places at once, promoting themselves and there image to millions of potential audience. ...read more.

An example of the you tube phenomenon is the video for the Jimi Hendrix song 'Red House', now because the song is so old it doesn't have a video to advertise and promote it. But an avid Jimi fan composed his very own video to go along with the song and posted it on the site. The dawn of fan made videos has really allowed filmmaking and music to work in tandem. Sometimes film makers will remake existing videos, portraying the artist in a more suitable image, and represent them differently to what they believe the audience will perceive the artist as. A video can often be the saving grace of a not so great song, someone may hear a song on the radio and not necessarily enjoy the tone, or sound of the song. But when the same person watches the accompanying video, attitudes can change. The composition of the video may represent the band as friendly appealing people, giving them positive gesture codes. By seeing the band in a different light to what they visualized it can turn the song around, and really make it appeal to the listener. ...read more.

MTV then branched out into celebrity and began to have VJ's (Video Jockey), one of these being 'Adam Ant' (mentioned before hand) who introduced each video to the rapidly growing viewer ship. Then in 1983 Michael Jackson insisted that his 14 minute video for 'Thriller' should be aired fully. MTV claimed it was 'too long' but some people assumed it was because he was black. Eventually the video was shown and became one of MTV's most requested clips of all time, in addition to this Thriller sold 800,000 copies in one week, the MTV promotion was never questioned for the success of the album. By the end of the 80's the relationship between MTV and the music industry was without question, even spawning the VMA's (video music awards) , a ceremony that entirely commemorated the music video in all its forms. In 1989 MTV went political broadcasting from behind the iron curtain; additionally in 1992 MTV broadcasted presidential elections, hoping to raise awareness within its young audience. 1996 signalled MTV to be the first music channel to air online, 9 years before you tube and a year later MTV UK was launched, increasing the viewer ship by 2 million. Finally in 2000 MTV's revenue was announced as $3.04bn, a landmark victory for any channel, let alone one that shows music videos. 1035628598 ...read more.