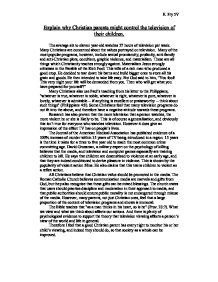 Explain why Christian parents might control the television of their children.

Explain why Christian parents might control the television of their children. The average six to eleven year-old watches 27 hours of television per week. Many Christians are concerned about the values portrayed on television. Many of the most popular programs, however, include sexual promiscuity, profanity, anti-family and anti-Christian plots, occultism, graphic violence, and materialism. These are all things which Christianity teaches strongly against. Materialism Jesus strongly criticises in the Parable of the Rich Fool. This tells of a rich man who produced a good crop. He decided to tear down his barns and build bigger ones to store all his grain and goods. He then intended to take life easy. ...read more.

Research has also proven that the more television that a person watches, the more violent he or she is likely to be. This is of course a generalisation, and obviously this isn't true for everyone who watches television. However it does give an impression of the effect TV has on people's lives. The Journal of the American Medical Association has published evidence of a 100% increase of murder within 15 years of TV being introduced in a region. 15 years is the time it takes for a three to five year old to reach the most common crime committing age. David Grossman, a military expert on the psychology of killing believes that the media, and television and computer games especially are training children to kill. ...read more.

The church states that users should practice discipline and moderation in their approach to media, and that public authorities should ensure public morality is not endangered through misuse of the media. However, many parents, not just Christian ones, feel that a large proportion of the content of television programs and shows is immoral. The Bible teaches that "as a man thinks in his heart, so is he" (Prov. 23:7). What we view and what we think about affects our actions. And there is plenty of psychological evidence to support the theory that television viewing affects a person's view of the world and life in general. Therefore I feel that a good Christian parent has every right to monitor his or her child's viewing, and indeed they should do, so that society as a whole can be improved. E. Fry 5V ...read more.