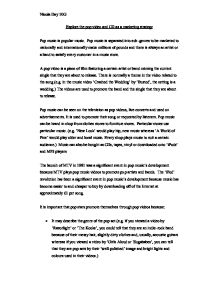 Explore the pop video and CD as a marketing strategy

Explore the pop video and CD as a marketing strategy Pop music is popular music. Pop music is separated into sub-genres to be marketed to nationally and internationally make millions of pounds and there is always an artist or a band to satisfy every customer in a music store. A pop video is a piece of film featuring a certain artist or band miming the current single that they are about to release. There is normally a theme in the video related to the song (e.g. in the music video 'Crashed the Wedding' by 'Busted', the setting is a wedding.) The videos are used to promote the band and the single that they are about to release. Pop music can be seen on the television as pop videos, live concerts and used on advertisements. ...read more.

if you viewed a video by 'Razorlight' or 'The Kooks', you could tell that they are an indie-rock band because of their messy hair, slightly dirty clothes and, usually, acoustic guitars whereas if you viewed a video by 'Girls Aloud or 'Sugababes', you can tell that they are pop acts by their 'well-polished' image and bright lights and colours used in their videos.) * The video may broadcast a political point (e.g. in 'Green Day's' video 'Wake Me Up When September Ends', there is a political point broadcasted about the September 11th terrorism attacks and the current war on Iraq.) * In the video, the star may be dancing or wearing a certain outfit to attract the opposite sex. * Many people (especially teenagers) , like to rapidly change or 'flick' through music channels on the television. ...read more.

Charlotte Church and 'El Divo') or music from when they were younger. Younger adults generally prefer music that is easy to listen to (e.g. 'Keane' and James Morrison). Teenagers generally prefer Hip Hop and Rap (e.g. 'Beyonce' and '50 Cent'), heavy metal (e.g. Slipknot and System of a Down), emotional rock (e.g. 'Taking Back Sunday' and 'Fall Out Boy') and music that is hip and often in the charts. Younger Viewers/Listeners generally prefer younger pop bands (e.g. 'McFly' and 'Girls Aloud'). Although these stereotypes are frequently made, occasionally teenagers and younger viewers/listeners prefer music that has come from an earlier time era or older viewers/listeners prefer more modern pop music. Most pop music fits into a genre (e.g. 'The Libertines' are an indie-rock band and Britney Spears is a pop artist), although some bands have combined two different music categories (e.g. 'Enter Shikari have used techno music in their heavy rock songs and 'Busted' have included guitars and drums into their younger pop songs.) Nicola Day 10G ...read more.