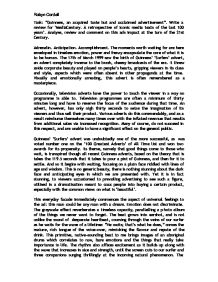 &quot;Guinness, an acquired taste but and acclaimed advertisement&quot;. Write a review for 'MediaCentury. A retrospective of iconic media texts of the last 100 years'. Analyse, review and comment on this ads impact at the turn of the 21st Century.

Task: "Guinness, an acquired taste but and acclaimed advertisement". Write a review for 'MediaCentury. A retrospective of iconic media texts of the last 100 years'. Analyse, review and comment on this ads impact at the turn of the 21st Century. Adrenalin. Anticipation. Accomplishment. The moments worth waiting for are here enveloped in timeless emotion, power and frenzy encapsulate the core of what it is to be human. The 17th of March 1999 saw the birth of Guinness' 'Surfers' advert, an advert completely inverse to the brash, cheesy broadcasts of the era. It threw aside corporate beauty and played on people's hearts, gripping viewers in its class and style, aspects which were often absent in other propaganda at the time. Visually and emotionally arresting, this advert is often remembered as a masterpiece. Occasionally, television adverts have the power to touch the viewer in a way no programme is able to. Television programmes are often a minimum of thirty minutes long and have to reserve the focus of the audience during that time. ...read more.

This everyday facade immediately commences the aspect of universal feelings to the ad: this man could be any man with a dream. Emotion does not discriminate. The grayscale effect reverberates a timeless capacity, parallelling a photo album of the things we never want to forget. The beat grows into earshot, and is not unlike the sound of desperate heartbeat, coursing through the veins of our surfer as he waits for the wave of a lifetime: "He waits; that's what he does," comes the mature, rich tongue of the voice-over, mimicking the flavour and repute of the drink. This primitive, native-sounding beat to me brings images of an aboriginal drums which correlates to raw, bare emotions and the things that really take importance in life. The rhythm also affixes excitement as it builds up along with the wave that increases in size and strength, until the screen cuts to our surfer and three companions surging thrillingly at the incoming natural phenomenon. The event in itself is awarded the stance of an amazing event in its own right: waves like this only occur for two-three weeks each year. ...read more.

However, the success of this advert can be arguably limited as the marvel on screen captures readers and diverts them from the matter at hand: advertising the drink. The relation between the advert and the drink i disjointed until the very end, when for a split second a pint of the beverage rolls forwards and back from the screen, like a wave rolling in perhaps. The only other link with the drink is the black and white hue cast over the entire advert, in the sense that the drink is black with a white head. Nevertheless, it could further be argued that this subtlety makes audiences want to discover the product being advertised, and heightens the viewers attention to it. The success of this advert lies in every aspect of it, from the discharging of countenance of vanity, greed and l**t many other adverts choose to play on, to the boring into kernel emotions of the human mind. The advert remains a relic of its kind, timeless in nature and predicament, setting the pathway for future television advertising. ?? ?? ?? ?? Robyn Cordall ...read more.