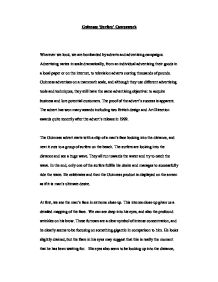 Guinness 'Surfers' Coursework. Wherever we look, we are bombarded by adverts and advertising campaigns.

Guinness 'Surfers' Coursework Wherever we look, we are bombarded by adverts and advertising campaigns. Advertising varies in scale dramatically, from an individual advertising their goods in a local paper or on the internet, to television adverts costing thousands of pounds. Guinness advertises on a mammoth scale, and although they use different advertising tools and techniques, they still have the same advertising objective: to acquire business and lure potential customers. The proof of the advert's success is apparent. The advert has won many awards including two British design and Art Direction awards quite recently after the advert's release in 1999. The Guinness advert starts with a clip of a man's face looking into the distance, and next it cuts to a group of surfers on the beach. The surfers are looking into the distance and see a huge wave. They all run towards the water and try to catch the wave. In the end, only one of the surfers fulfils his desire and manages to successfully ride the wave. He celebrates and then the Guinness product is displayed on the screen as if it is man's ultimate desire. ...read more.

If we imagine this situation to be a war, we can think of the opposition as the sea. We then watch all the surfers running almost simultaneously towards the water. When the surfers reach the water they are all getting dragged under, but force themselves back up to the surface to fight their battle. As the wave rapidly approaches the men, white water fiercely spatters in all directions. Similarly to the eyes of the man at the beginning of the advert, we can see a clear resemblance to the Guinness product itself. The top of the wave looks very much like a pint of Guinness being poured. The struggle of the men against the wave now begins. Instantly after the aerial shot, we focus into the men and are drawn to the fact they look extremely engaged and ready for the approaching wave. The next shot is of a man in a struggle with the wave. His facial expressions vary greatly from earlier shots. His face has changed from engaged and psyched, to extreme panic and even fear for his life. ...read more.

This keeps you gripped as the tension grows. As well as the beat, we hear a voice in the background saying: "He waits; that's what he does. And I tell you what: tick followed tock followed tick followed tock followed tick... Ahab says, 'I don't care who you are, here's to your dream.' 'Here's to you, Ahab'. And the fat drummer hit the beat with all his heart. Here's to waiting" The background voice over is a clearly from the book "Moby d**k" Moby d**k is about the struggle of a man to catch a whale. We can relate it to the advert, as there is a struggle with a colossal wave. The words also add a slightly sinister atmosphere and along with the steady pulsating beat, it gives a very hypnotic refrain. The Guinness advert is inspirational. It portrays Guinness as being a powerful, masculine and desirable product. The combination of the background beat and music creates a mesmerizing and tense scene. Relief from the tension comes with the knowledge that the surfers are safe and just as the viewer feels able to relax, the screen is filled with the picture of a pint of Guinness. Despite this being the only glimpse that we have of the product it is this picture that the audience will remember. ...read more.