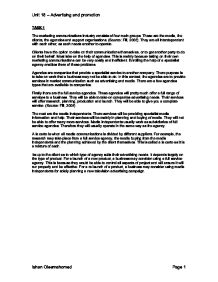 TASK 1 The marketing communications industry consists of four main groups. These are the media, the clients, the agencies and support organisations. (Source: Fill, 2006). They are all interdependent with each other, as each needs another to operate. Clients have the option to take on their communications themselves, or to get another party to do on their behalf. Most take on the help of agencies. This is mainly because taking on their own marketing communications can be very costly and inefficient. Enrolling the help of a specialist agency enables them of these problems. Agencies are companies that provide a specialist service to another company. There purpose is to take on work that a business may not be able to do. In this context, the agencies are to provide services in market communication such as advertising and media. There are a few agencies types that are available to companies. Firstly there are the full service agencies. These agencies will pretty much offer a full range of services to a business. They will be able to take on companies advertising needs. Their services will offer research, planning, production and launch. They will be able to give you a complete service. (Source: Fill, 2006) The next are the media independents. There services will be providing specialist media information and help. Their services will be mainly in planning and buying of media. ...read more.

Sony has used an innovative form of advertising and promotion of its new range. The impact has been significant. The music that backed the bouncing b***s advert reached number 6 in the UK music charts, mainly due from the advert. This fact alone demonstrates the impact the advert had. The advert caused a sensation and was the talk of many conversations. I remember people asking me if I had seen the exploding building advert. Other companies in the same market have used similar types of advertising. Philips recently used a TV campaign to promote their new range of plasma screened televisions. It had a man sitting down watching The Incredible Hulk film on a Philips TV, and all of a sudden the character from the film emerges. This is similar to the Sony magazine advert campaign that depicts images from the television set falling out of the screen into the living room. The current trends in advertising and promotion in the television market is to capture the imagination of the viewer and inspire them by making visually beautiful films. BRAVIA is the premium brand from Sony. It is targeted at AB professionals with high income. The advertising campaign appears to be a success. It has attracted lots and lots of interest and has a huge amount of media coverage. On the BRAVIA website, many people have signed up to view the site and watch the advert. ...read more.

PR is about how a company is perceived by others and the reputation is has. Public relations can work in a number of ways. An example could be a prize giveaway in a national newspaper. Although there is no direct advertisement from the company, the newspaper will be endorsing the products names. All of these methods would be used by a company as part of an advertising campaign to an extent. TASK 5 Depending on the product, a company has various options at the launch period as to what type of below the line techniques they can use. The launch is the most critical time for new product. No one will have heard of the new product and sales would be reluctant. The use of PR and sales promotions would be promenade. Making the brand name recognisable by the consumer is a key objective. The use of public relations such as sponsorship of a well known event would be a good idea. Another would be to offer an incentive to by the product with the use of sales promotions. For example, with every BRAVIA television you get a free DVD player. Towards the end of the product life cycle different techniques could have to be used. To ensure stocks of the product sells, the business could use another form of sales promotion such as discounts and buy one get of free. As the product gets older its level of interest drops from the consumer, so keeping the product in their mind is a key priority. ...read more.