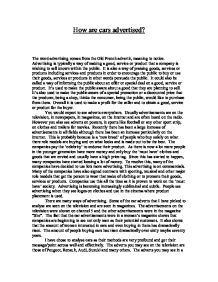 How are cars advertised?

How are cars advertised? The word advertising comes from the Old French advertir, meaning to notice. Advertising is typically a way of making a good, service or product that a company is wishing to sell known within the public. It is also a way of praising goods, services or products including services and products in order to encourage the public to buy or use their goods, services or products in other words persuade the public. It could also be called a way of informing the public about an offer or special deal on a good, service or product. It's used to make the public aware about a good that they are planning to sell. It's also used to make the public aware of a special promotion or a discounted price that the producer, being a shop, thinks the consumer, being the public, would like to purchase from them. Overall it is used to make a profit for the seller and to obtain a good, service or product for the buyer. You would expect to see adverts everywhere. Usually advertisements are on the television, in newspapers, in magazines, on the internet and are often heard on the radio. However you also see adverts on posters, in sports like football or any other sport strip, on clothes and trailers for movies. Recently there has been a large increase of advertisements in all fields although there has been an increase particularly on the internet. This is probably because is a 'new breed' of people who buy solely on what there role models are buying and on what looks and is made out to be the best. The companies pay the 'celebrity' to endorse their product. As there is now a lot more people in the younger generation have more money and only buy the 'must have' clothes and goods that are envied and usually have a high price tag. ...read more.

This makes the target audience being both male and female think of it as being a reliable car that has can deliver anything you could want from it. The advert starts off by showing a boy going to some lengths to look out of his window, to see nothing but a wood side road covered with autumn leaves. The boy's mum comes in with some biscuits on a tray and looks at him. The camera then moves to a school playground, where a teacher looks over to the wall where some children are lifting another one up so that he can see the Suzuki. He doesn't see anything for a while and then from the distance he sees the car coming down the road. The camera angle changes to the first person view looking through the branches as it tracks and pans the car. Each scene has a flowing feeling from one to each other, which gives the advert a smooth look. This adverts shows the car as being an all-round good car for the family which is suited to an off road area. This is the only advert that has a voiceover. The voiceover says "Suzuki Grand Vitara, 1 3 9 9 5". This makes the car sound cheaper. One of the factors that these cars have in common is probably the fact that they show little of the specifications apart from the Laguna. This is probably because they don't wish to waste time on the advertisement and that the price they show reflects their basic standard and if they were to put the cars specifications in they would want to put the best in. They also all want to suggest an immediate lifestyle choice. The main factor that all of the above advertisements have in common is that they show sexism towards men. They all seem to be trying to appeal to very male orientated audience. ...read more.

I think that in the future years advertising on the television will take a more neutral role in its sexism as both men and women watch television. I think that in magazines advertising has already taken a neutral s****t stance. It will probably now move towards advertising to a predominantly female target audience. This will be because there are usually a lot more women reading magazines and the era for cars and men is dying, as men are now more interested in their sport and music. I think that magazines are starting to have a much more neutral position on sexism by showing more family cars than television where the target audience is usually male. I also noticed that the more expensive cars such as the Volkswagen are aimed at a more general target audience, maybe because the older generations want a fashionable product that they can afford. It is also suitable for a family car and has a greater choice of uses being, a family car, a fashionable car or even a safer car whereas something like the Suzuki is made for one target audience. I noticed that companies often use visual imagery to get you interested in the advert. This is often the case on the television advertisements, where the advert starts by gripping the audiences' attention and then shows them the car. I doubt that many people know that the advertisement is advertising a car until the end. It is a great way of getting the message that your car is better that the competitions across. All of these adverts have a strong bias persuading and influencing their potential buyer that their car is the only one out there that can do a special function or lower fuel consumption or a faster speed. Music is often used. It usually starts off quite slow and quite creating a mood and atmosphere of tension and then it gets quicker and the sound level goes up, as the car appears. Adverts also use vibrant colours to get their target audience's attention. ...read more.